NOIDA (UP): A 45-year-old engineer died tragically after being trapped in his car when the vehicle caught fire early on Tuesday in Greater Noida, police said. 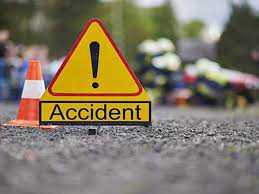 A 45-year-old engineer died tragically after being trapped in his car when the vehicle caught fire early on Tuesday in Greater Noida, police said.

The man was identified as Pavan, a native of Amba in Himachal Pradesh, they said, adding how the fire started is being investigated.

A police officer said by the time they reached the spot near the DPS Society, under Kasna police station limits, the vehicle, a sedan, was already in flames and the body was later found inside.

"The man was identified as Pavan, who was working in a private company here. He was returning after a night shift when the incident took place at 5.30 am. He was only half a kilometre short of reaching home," Circle Officer, Greater Noida 1st, Nishank Sharma said.

He said the identity of the deceased was confirmed after matching the details of registration number of the car.

"It appears that the running car, a Ford Ikon, had caught fire and the man could not eject himself out in time," Sharma said.

The body has been sent for post mortem, he said.

The police official said short-circuit and problems with the blower appear to have triggered the fire but an investigation was underway.

"We have got to know that he had sent Christmas greetings to friends and relatives in the morning, around 5 am. Everything was fine till then until the fire broke out accidentally. It appears that he could not eject himself from the vehicle in time," Kasna Station House Officer Ramphal Tomar said. — PTI