Fidayeen — the lethal discovery of militancy

SRINAGAR:The small units of highly trained and heavily armed militants that storm into security installations like the one which stormed an Army base in north Kashmir’s Uri sector this morning are the most lethal discovery of Kashmir’s decades-old insurgency. 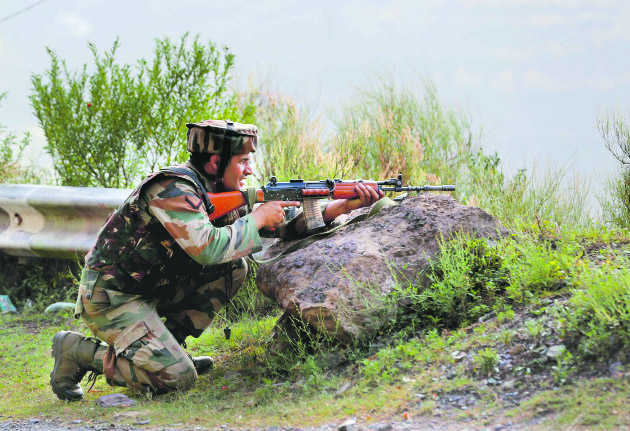 A soldier near the attack site.

The small units of highly trained and heavily armed militants that storm into security installations like the one which stormed an Army base in north Kashmir’s Uri sector this morning are the most lethal discovery of Kashmir’s decades-old insurgency.

These militants, known as fidayeen, carry an important advantage — the element of surprise, which allows them to choose the location, timing and inflict damage in the initial assault before they are detected and killed.

The introduction of fidayeen in Kashmir insurgency came in the aftermath of the 1999 Kargil war and instantly changed the arithmetic of the conflict. Fewer militants who made up a fidayeen unit mounted heavy casualties on security forces. They attacked anywhere, almost everywhere.

The first fidayeen attack was launched on a BSF camp in July 1999 and a Deputy Inspector General and four soldiers of the paramilitary force were killed. In August 1999, three fidayeen attacks were launched in which a Colonel, Major, two Junior Commissioned Officers and six soldiers were killed.

In 1999, at least 11 fidayeen attacks shook the counter-insurgency grid as militant units stormed into fortified symbols like the Army’s Srinagar-based Headquarters and the main base of the Jammu and Kashmir Police’s Special Operations Group in which 12 personnel, including an officer, were killed.

The Lashkar-e-Toiba, one of the few foreign groups to operate in Kashmir, was the pioneer in carrying out fidayeen attacks in the Valley. The Jaish-e-Mohammed soon followed and also introduced suicide bombers, the first among whom crashed an explosive-packed car into the gate of the Army’s Srinagar-based Corps Headquarters.

As Pakistan banned the Lashkar-e-Toiba and the Jaish-e-Mohammed in the aftermath of the 9/11 attacks on the US, several fidayeen attacks were owned by the little-known outfits like the Shuhada Brigade, Medina Regiment, Al Mansoorian and the Al Nasireen.

Most of the fidayeen militants are foreigners, mainly Pakistanis and at least one British, and a few have been from Kashmir. The fidayeen militants continued to attack security installations in Jammu and Kashmir through the early years of the last decade even as they launched several attacks outside the state, one unit targeting the Red Fort, another associated with the Jaish-e-Mohammed which attacked Parliament.

A retired Army officer, who has served in Kashmir, described the fidayeen as part of a “hybrid war, where the whole intention is to cause exasperation”. “Fidayeen are small teams who want to do something and who have the initiative,” the officer said.