GUWAHATI: Torrential rain, flood and landslides have wreaked havoc in parts of Arunachal Pradesh and Assam, affecting lakhs of people. 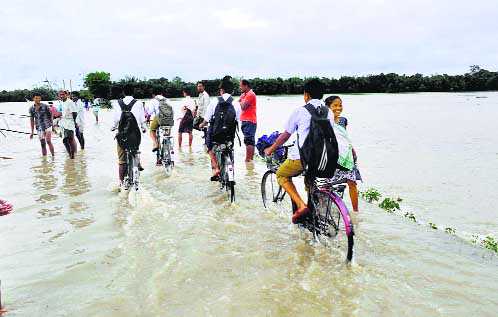 School students cycle through a flooded street in Baksa district in Assam on Wednesday. PTI

Torrential rain, flood and landslides have wreaked havoc in parts of Arunachal Pradesh and Assam, affecting lakhs of people. While the situation is worse in Arunachal Pradesh, 10 districts in Assam have been affected by flood so far.

Two persons were killed in rain-induced landslides in Itanagar (Arunachal Pradesh) where rain and flash floods have caused extensive damage to the road network, cutting off many areas for over 48 hours.

According to an alert from the Disaster Management Department in Arunachal Pradesh, the flood situation is likely to worsen as heavy rainfall is expected in the state till June 13 next.

The Arunachal Pradesh government has ordered closure of all schools in the state capital from today till June 13.

Yingkiong, the flood-hit district headquarter of Upper Siang district of Arunachal Pradesh, has been cut off from the rest of the country for the past 72 hours due to landslides. Dibang Valley district is also cut off from the rest of the state for the past five days. Similar is the situation in Anjaw district where Seti bridge between Hawai, Walong was washed away on June 8, causing a complete disruption of road traffic to Walong and Kibithoo from Hawai.

In Assam, about 90,000 persons from over 190 villages under 18 revenue circles in 10 districts have been affected so far due to floods. Around 3,766 hectare fields have been inundated. The main channel Brahmaputra is flowing above the danger mark in many parts of the state.