NEW DELHI: Lt Gen JFR Jacob (retd) died on Wednesday in the National Capital. He was 93. Jacob was the Chief of Staff of the Eastern Army Command during the 1971 war with Pakistan. 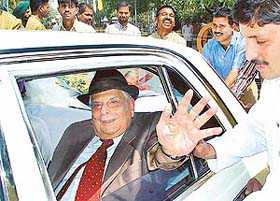 Lt Gen J.F.R. Jacob waves goodbye at Punjab Raj Bhavan as he leaves the office of Punjab Governor and UT Administrator in Chandigarh in May 2003. Tribune photo by Manoj Mahajan

Lt Gen JFR Jacob (retd) died in the National Capital on Wednesday. He was 93. Jacob was the Chief of Staff of the Eastern Army Command during the 1971 war with Pakistan.

Lt Gen JS Aurora was heading the command at Kolkata when the Indian Army and Air Force liberated Bangladesh, which was then known as East Pakistan.

Jacob was the Governor of Punjab and administrator of Chandigarh between November 1999 and November 2003. Jacob, a bachelor, was living in Delhi's RK Puram.  He died after a brief illness at the Army's Research and Referral Hospital.

Lt Gen JFR Jacob & I interacted often. Had a memorable interaction when he presented his autobiography to me. pic.twitter.com/h32apAvBrm

He authored the book 'Surrender at Dacca' in which he explianed the surrender of 90,000 Pakistani troops.

Jacob as the Administrator of Chandigarh brought in people-oriented changes. He was famous for dropping in unannounced at public offices to check their functioning.

Israel Ambassador in India Daniel Carmon also paid homage to General Jacob as a proud "Indian and a proud Jew".
He said he was a living bridge between the people of India and Israel, adding that he was sorry for the loss.