Cold wave conditions continued unabated in north India today with the mercury hovering below normal levels in most parts and hilly areas reeling under freezing conditions. 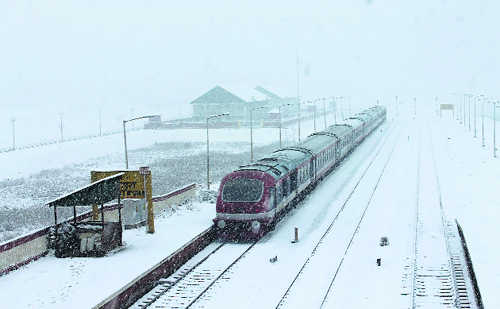 The Valley lifeline: While road connectivity has been disrupted due to massive snowfall in J-K, train services continue to run from Srinagar to Banihal. Tribune photo: Amin War

Cold wave conditions continued unabated in north India today with the mercury hovering below normal levels in most parts and hilly areas reeling under freezing conditions. Intermittent snowfall continued in the Kashmir valley, while heavy snowfall and rain lashed higher reaches in Himachal Pradesh and Uttarakhand.

In the national capital, residents woke up to a chilly morning with icy winds sweeping across the city. However, as the day progress the sun shone bright.

Kashmir Valley continued to have snow for the third day today forcing the closure of Srinagar-Jammu national highway. Reports of snowfall were received from most parts of the Valley.

Srinagar, the summer capital of Jammu and Kashmir, recorded 1.7 cm of fresh snow during the night.

Pahalgam hill resort in south Kashmir, which serves as the base camp during the annual Amarnath yatra, recorded 17 cm of snow, while Qazigund on the Srinagar-Jammu national highway recorded a low of zero degree Celsius, same as yesterday, and the town received 8 cm of snow till this morning.

The cave shrine of Mata Vaishno Devi in Trikuta hills of Jammu and Kashmir also experienced overnight snowfall. Normal life was affected in Himachal Pradesh as tribal belt and other higher hills received another spell of snowfall while moderate to heavy rains lashed several other parts of the state.

Rohtang Pass recorded 100 cm of snow during the past 24 hours while Kalpa, Keylong in Kinnaur and Lahaul, Spiti tribal districts recorded 60 cm and 25 cm of snow, respectively, till this afternoon.

The Hindustan-Tibet National Highway was closed due to heavy snow at Narkanda. The Dhauladhar ranges in Kangra, Churdhar ranges in Sirmaur and Chansel and Saach passes are experiencing intermittent heavy snowfall since the last morning and covered under 100 cm thick blanket of snow.

The high-altitude areas in Garhwal Himalayas in Uttarakhand were covered with a thick shroud of snow  even as Chamoli, Uttarkashi, Rudraprayag and Pithoragarh districts of Uttarakhand received fresh snowfall.

Light to moderate rains lashed several parts of Punjab and Haryana even as the minimum temperatures rose by up to six notches above normal in the region.With rains lashing the region, foggy conditions dissipated from both the states, bringing air and rail traffic back on track, officials said. — Agencies