NEW DELHI: Breaking the ice, National Security Advisers of India and Pakistan today met in Bangkok and discussed peace and security, terrorism, Jammu and Kashmir and agreed to carry forward the constructive engagement. 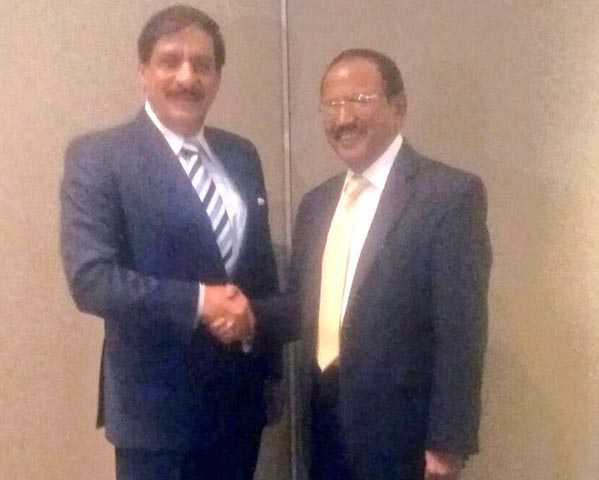 Breaking the ice, National Security Advisers of India and Pakistan today met in Bangkok and discussed peace and security, terrorism, Jammu and Kashmir and agreed to carry forward the constructive engagement.

This was the first time the new NSAs, Ajit Doval of India and his Pakistan counterpart Lt Gen Naseer Janjua (retd) met, which takes forward the Ufa agreement and follows the meeting of Prime Minister Narendra Modi and Pakistan Prime Minister Nawaz Sharif in Paris recently.

“They were guided by the vision of the two leaders for a peaceful stable and prosperous South Asia. Discussions covered peace and security, terrorism, Jammu and Kashmir, and other issues, including tranquility along the Line of Control. It was agreed to carry forward the constructive engagement,” a joint release said.

The Ufa agreement in July had agreed upon a roadmap that was to begin with talks between the two NSAs on terror. However, the talks scheduled for August was called off after acrimonious exchange of words over issue of Jammu and Kashmir.

Since then the talk about talks remained in cold storage while apparent back channel talks and those on Track-II remained on course outside the glare of the media.

The talks also come ahead of possible visit of External Affairs Minister Sushma Swaraj to Pakistan for The Heart of Asia Conference on Afghanistan this week, where she could meet Sartaj Aziz, the Foreign Affairs Adviser to Pakistan Prime Minister.

More forces for Punjab ahead of Blue Star anniv