WASHINGTON: Categorically rejecting any scope for third-party mediation between India and Pakistan on Kashmir, External Affairs Minister S Jaishankar has said that India’s stand has been clear for decades and the two countries can discuss the issue bilaterally. 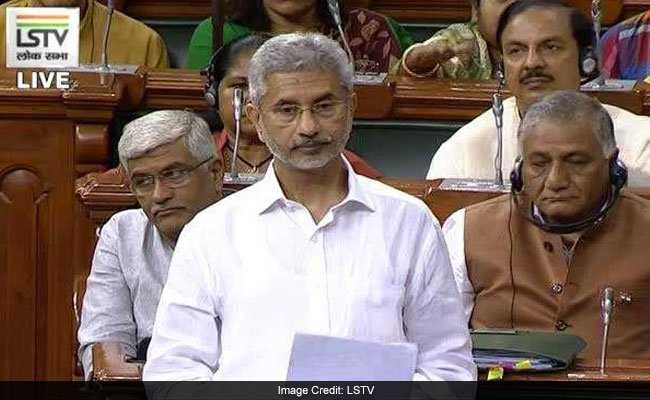 Categorically rejecting any scope for third-party mediation between India and Pakistan on Kashmir, External Affairs Minister S Jaishankar has said that India’s stand has been clear for decades and the two countries can discuss the issue bilaterally.

Jaishankar arrived here on Sunday night from New York after attending the annual General Assembly session of the United Nations along with Prime Minister Narendra Modi.

On the sidelines of the UN General Assembly session, the two leaders held bilateral meetings with dozens of world leaders.

“India has been clear for 40 odd years that we would not accept mediation...and that whatever has to be discussed has to be discussed bilaterally,” Jaishankar told a group of Indian reporters on Wednesday when asked about US President Donald Trump’s mediation remarks on Kashmir.

Trump in the recent past has offered mediation between India and Pakistan on the Kashmir issue.

“I’m clear in my mind as far as I’m concerned. That’s what it’s about. My point is very simple. Whose issue (is this?). Mine. Who has to take the call? Me. If it is my issue and I have to take the call; I will decide whether I want somebody’s mediation or not. You can offer anything you like, but if I decide it is not relevant to me then it does not happen,” Jaishankar said.

The External Affairs Minister said in half of his meetings on the sidelines of the UN General Assembly session, the issue of recent developments in Jammu and Kashmir popped up.

“In terms of (issue of) Article 370, I would find it hard to quantify, but I would say maybe in about half my meetings it came up and maybe in half of my meetings it didn’t come up. It wasn’t that every guy who came to me came with that burning question,” he said.

Frankly, most of them were focused on the bilateral relations, he said, adding that even those who raised it, it was not necessarily the first issue of interest to them.

“I think in the case of people who showed interest, it was more like, we have read about developments on Kashmir and it would be useful for us to hear from you,” he said.

The External Affairs Minister said that in many cases a lot of what he said was new to them.

“When you explain to them that Article 370 was temporary, when you tell them that it was part of the Constitution of India in which delegates from Jammu and Kashmir also took part, when you tell them that there was a provision within the Article for the modification which took place, and you explain to them that today major source of concern was the fact that Jammu and Kashmir is really not aligned with the rest of India on a whole set of issues and so, therefore, how do you really run a country where one large state is misaligned with rest of the country.

“It’s a very basic governance issue which people have ducked in the past. But because they ducked in the past doesn’t mean that everybody keeps ducking in the future. I think, once you walked them (world leaders) through this, most of them understood it and got it,” he said.

When specifically asked about the position of two countries–Malaysia and Turkey–on Kashmir, the minister said, “Obviously they have been given an understanding which clearly is very different from the facts on the ground.”

Modi and Jaishankar’s meeting came against the backdrop of the Indian government revoking the special status to Jammu and Kashmir and bifurcating the state into Union Territories on August 5.

Tensions between India and Pakistan spiked after India abrogated provisions of Article 370 of the Constitution, evoking strong reactions from Pakistan.

India has categorically told the international community that the scrapping of Article 370 was an internal matter and also advised Pakistan to accept the reality. PTI