HYDERABAD/NEW DELHI: In a major breakthrough, Hyderabad-based biotechnology research company Bharat Biotech has announced that it has developed the world’s first vaccine for Zika virus. 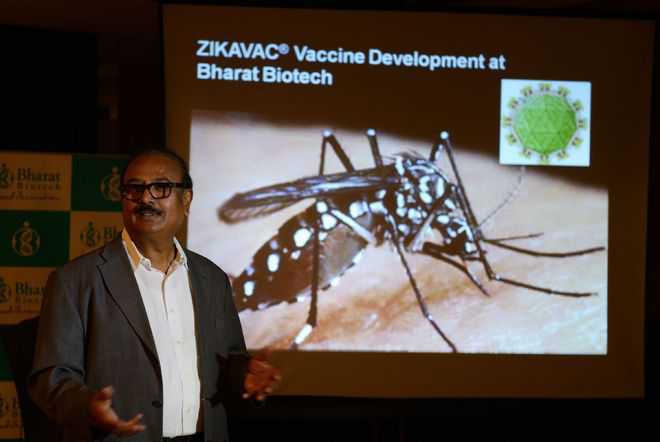 In a major breakthrough, Hyderabad-based biotechnology research company Bharat Biotech has announced that it has developed the world’s first vaccine for Zika virus.

The company has submitted two vaccine candidates — one inactivated and one recombinant — to the Government of India and is waiting for regulatory approvals to produce the vaccine on a large scale.

The company officials are confident of producing one million doses of the vaccine, if clinical trials are completed as per the plan and approvals are given swiftly.

Zika virus is transmitted through the bite of an infected Aedes mosquito, which also transmits diseases such as dengue and chikungunya. Bharat Biotech submitted the necessary information to the Indian Council of Medical Research four days ago.

The government today called researchers for discussions on the vaccine quality to see if its development can be fast-tracked.

Dr Soumya Swaminathan, Secretary, Health Research, and Director General, ICMR, said, “Bharat Biotech has taken a lead in the possibility of developing a Zika vaccine. They applied for a patent for the vaccine almost a year ago. This step places the company at the head of Zika vaccine research developments.” Bharat Biotech has also manufactured Rota virus vaccine, which the government is set to roll out from March in four states. This is the first indigenous Rota virus vaccine.