Irom Sharmila to end her fast of 16 years; will fight polls 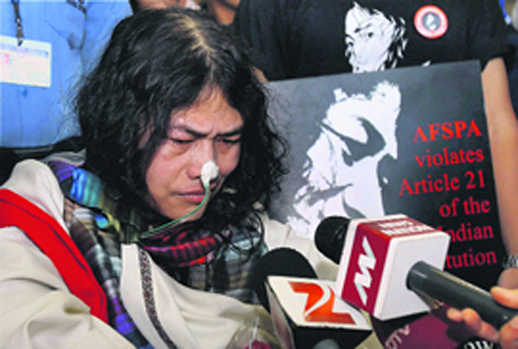 The 44-year-old iconic rights activist, who has been forcibly fed through a nasal tube since 2000, said she would join politics as she no longer believes that her fast will lead to the repeal of the "draconian" AFSPA.

"I will end my fast on August 9 and contest elections on an independent ticket," Sharmila told the media after coming out of a local court here where she is facing a trial for attempting suicide.

“I will join politics and my fight will continue," Sharmila, who has refused to eat or drink anything since November, 2000 and is forcibly fed through a nasal tube in Imphal's Jawahar Lal Nehru Hospital, a special ward of which acts as her prison.

Assembly elections in Manipur are scheduled early next year.

In the past, many political leaders have met Sharmila and tried to cajole her into joining politics but she has rejected all offers.

She also expressed her desire to get married after coming out of prison on August 9.

The civil rights activist is known to have a boyfriend, a British national of Indian origin, who has in the past been in trouble with Sharmila supporters.

On the charge of attempting suicide by means of a fast unto death in 2006 at Jantar Mantar in New Delhi, she has been arrested, released and then re-arrested from time to time.

The maximum punishment under Section 309 of IPC is a one-year jail term.

On November 2, 2000, an Assam Rifles battalion had allegedly killed 10 civilians at a village near Imphal. Three days later, Sharmila embarked on her fast demanding revocation of AFSPA, which allows security men to even kill a person on suspicion without the fear of facing a trial in court.

Sharmila's non-violent resistance has become a nucleus for collective protest against AFSPA in the northeastern states.

Her Gandhian-like struggle has won her several human rights awards, including the 2007 Gwangju Prize for Human Rights, which is given to "an outstanding person or group, active in the promotion and advocacy of peace, democracy and human rights".

A network of civil societies like NAPM, Gandhi Global Family, Asha Parivar, Jagriti Mahila Samiti, Yuva Koshish, Asian Centre of Social Studies and Mission Bhartiyam have been running a "Save Sharmila Campaign" for many years.

Many books have been written about her life while a short documentary 'My Body My Weapon' has also been made on the same.

Pune-based theatre artist Ojas S V has in the past performed a mono-play titled 'Le Mashale' (Take the torch), based on her life, in different cities.

Sharmila herself is a poet having published a collection of poems in Manipuri language. — PTI