Jadhav must be released at the earliest, India tells Pak

NEW DELHI: A day after the International Court of Justice ordered review of the death penalty to Kulbhushan Jadhav, India today asked Pakistan to release the former Navy officer forthwith. 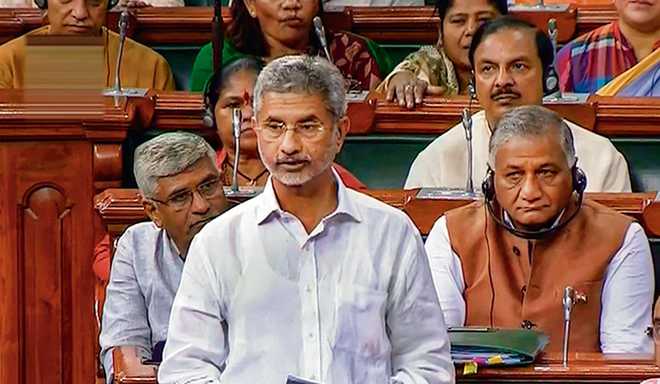 External Affairs Minister S Jaishankar makes a statement in the Lok Sabha on the ICJ verdict on Kulbhushan Jadhav during the ongoing Budget Session of Parliament in New Delhi. PTI

A day after the International Court of Justice ordered review of the death penalty to Kulbhushan Jadhav, India today asked Pakistan to release the former Navy officer forthwith.

Subsequently, in a late night statement, the Pakistan foreign ministry said it would grant consular access to Jadhav according to the Pakistani laws, for which the modalities were being worked out. The ministry also said Jadhav had been briefed of his rights under the Vienna Convention on consular relations.

Earlier in the day, while speaking in both Houses of Parliament, External Affairs Minister S Jaishankar said: “Jadhav is innocent of the charges made against him. His forced confession without legal representation and due process will not change this reality. We once again call upon Pakistan to release and repatriate him forthwith.”

The ICJ yesterday directed Pakistan to suspend the death sentence given by a military court in 2017 to Jadhav, 49, on charges of espionage and sabotage.

“The government will vigorously continue its efforts to ensure his safety and wellbeing, as well as his early return to India,” Jaishankar said as members cutting across party lines welcomed the landmark judgment by thumping benches.

Jaishankar, who first made the statement in Rajya Sabha and then in Lok Sabha, noted that Jadhav was awarded the death sentence by a Pakistan military court martial on “fabricated charges”. This was done without providing Indian representatives consular access to him, as envisaged by international law and practice.

Meanwhile, MEA spokesperson Raveesh Kumar said the ICJ had vindicated India on eight points. “It appears they are reading from a completely different verdict. If they have no patience to read 42 pages, they can go through the seven-page press release,” he quipped. “The very first paragraph says the judgment is final and binding,” he added. — PTI/TNS

Pakistan was found to have deprived India of the right to communicate with Jadhav, have access to him, visit him in detention and arrange his legal representation... Jadhav is innocent. —S Jaishankar, External Affairs Minister