KANCHEEPURAM (TN):Jayendra Saraswathi, the 69th pontiff of the Kanchi Mutt, was today buried in the Brindhavanam annexe on the premises of the religious establishment here with Vedic honours. 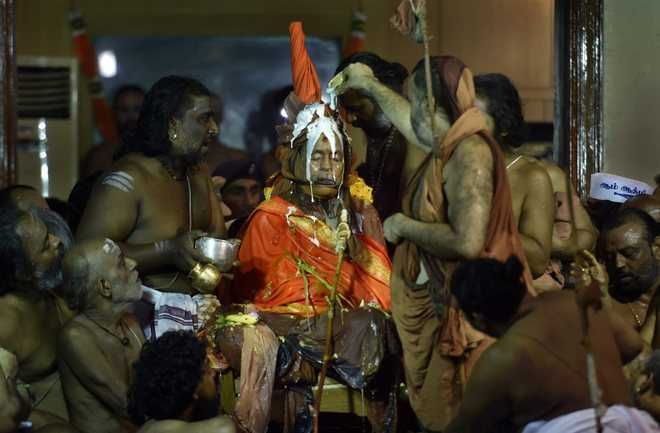 Jayendra Saraswathi, the 69th pontiff of the Kanchi Mutt, was today buried in the Brindhavanam annexe on the premises of the religious establishment here with Vedic honours.

Amid chants, the body of the 82-year-old (in sitting posture) was lowered into a large bamboo basket placed inside the 7 ft x 7 ft burial pit in the annexe. The pit was filled with herbs like “Vasambu”, salt, sandalwood and sand.

Marking conclusion of the ceremony that lasted for over three hours beginning 7.45 am, a grand “aarti” was performed, with Tamil Nadu Governor Banwarilal Purohit also in attendance.

The ceremony began with the performance of “abishekam” on the body of Jayendra Saraswathi that was seated with folded hands in a chair. The mutt hall reverberated with hymns with emotional devotees bidding farewell to the revered saint. The body was earlier brought from the main hall in a chair to the Brindhavanam annexe housing the mausoleum of Sri Chandrasekarendra Saraswathi, his predecessor.

The mortal remains of the seer had been kept for public homage in the main hall of the Mutt premises since yesterday morning.

Devotees were teary-eyed during the burial ceremony when the “Kailaya Vadhyam” was played (a form of Tamil music involving use of traditional drums and trumpets). — PTI