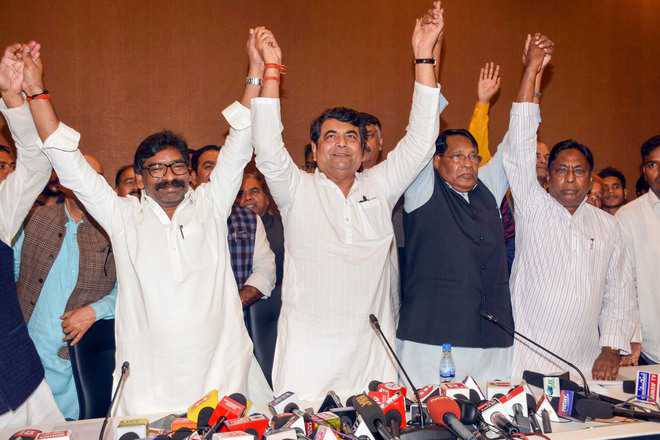 The Congress, Jharkhand Mukti Morcha and Rashtriya Janata Dal today announced a grand alliance for the forthcoming Jharkhand elections projecting JMM chief Hemant Soren as the face of the coalition. The Congress agreed to play a junior partner in Jharkhand, where it had contested on all 81 Assembly seats in the 2014 state poll, and lost.

The JMM will contest on 43 seats, Congress 31 and RJD seven. The RJD was seeking at least 14 seats, but could not bargain hard with party supremo Lalu Prasad out of active political landscape. His son Tejashwi Yadav was missing from the stage from where Hemant Soren and AICC in charge for Jharkhand RPN Singh announced today’s deal.

Singh said Soren would be the face of the alliance, literally projecting him as the CM should the party cross the majority mark.

The Congress, JMM and RJD have this time kept JVM and Left parties out of their pre-poll pact despite going with the two in the recent Lok Sabha poll. The grand alliance was decimated in the state. For the Congress to play a junior partner to the JMM is also a big downgrade that party leaders say is “rooted in pragmatism”.

The party won only six seats in 2014 state poll despite contesting all 81 seats. The BJP swept to majority winning 43 seats.

Facing a revival challenge, the Congress agreed not just to contest on lesser seats than the JMM, but also to project Soren as the potential CM face.

Jharkhand goes to the polls in five phases from November 30 to December 20 and results will be announced on December 23.