Led from front, even as Punjab Governor

Chandigarh: General Om Prakash Malhotra, a warrior to the core who was never shy of fighting for principles even out of uniform, passed away today in Gurgaon. He was 93 and is survived by his wife Saroj, son and former diplomat Ajay and a daughter who lives in London, said sources close to the family. 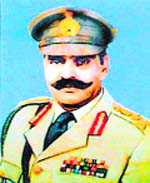 General Om Prakash Malhotra, a warrior to the core who was never shy of fighting for principles even out of uniform, passed away today in Gurgaon. He was 93 and is survived by his wife Saroj, son and former diplomat Ajay and a daughter who lives in London, said sources close to the family.

The General was part of that exceptional band of Indian Army officers whose field experience spanned continents and epochs. He was part of a still rare breed of men and women who chucked sinecures on the matter of ethics, as he did as Governor of Punjab in 1991, when his opinion and efforts were overlooked by the Centre.

In the pages of military history, Punjab remembers Gen Malhotra with gratitude for the ‘Battle for Sialkot’ during the 1965 war. The thrust by the 1 Artillery Brigade under his command forced Pakistan to thin forces from its main attack column that had overrun Khemkaran and was making a bid to drive a wedge through the heart of Punjab.

But in the annals of political Punjab, Gen Malhotra’s commitment to ethics and morality of governance stands tall over his military exploits at a time when a sharp wedge was again being driven through the state’s heart. It was 1990 and Punjab needed a firm and bipartisan person as Governor to battle militancy and navigate the state to democracy at the same time.

This Srinagar-born soldier, who had done field service on both of India’s unruly flanks of North Western Frontier Province and the Burma border even before Independence, fitted the bill.

Gen Malhotra was not just another officer with a glittering career in the military. He had served as Defence Attache in Moscow and as Ambassador to Indonesia after retiring as the Indian Army’s 13th Chief of Staff.

Taking over as Punjab Governor, Gen Malhotra brought about operational seamlessness among difference security forces deployed in the state. He also ordered an amnesty that allowed militants with weapons to surrender. The initiative helped at least some who had picked up the gun to get absorbed into the mainstream.

At the same time, the General nudged the state towards elections and tested the waters with municipal polls. Encouraged, the Chandra Shekhar government sought conduct of Assembly elections in Punjab and Chief Election Commissioner TN Seshan gave the go-ahead.

As Punjab went into the election mode, the political scene in Delhi changed. PV Narasimha Rao as Prime Minister didn’t want the elections to take place because his party had already announced a boycott. Seshan seemed to have sensed the political wind and cancelled the polls.

“I have been through three wars, I have been a General in the wars, but I have never felt as defeated as I feel today after this announcement by the EC that the elections have been postponed," commented a dejected Gen Malhotra while walking out of his office into the sunset and to lasting acclaim.

He then took to charitable causes. “He lived a full life. No regrets. It was only in the last three-four days that he had stopped eating,” said a family source.