NEW DELHI: The NHRC has issued a notice to the Uttar Pradesh government after a labourer had to carry his teenage son’s body on his shoulders as he was allegedly denied an ambulance by a hospital in Etawah district. 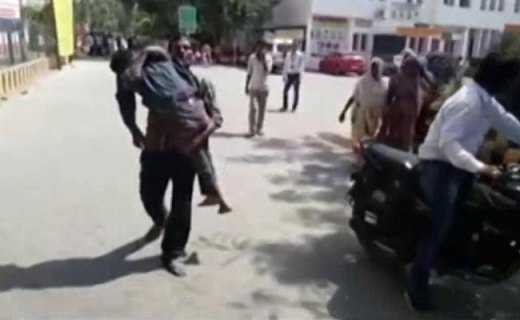 Udayveer carrying body of his son outside a hospital in Etawah, UP. TV grab

The NHRC has issued a notice to the Uttar Pradesh government after a labourer had to carry his teenage son’s body on his shoulders as he was allegedly denied an ambulance by a hospital in Etawah district.

The National Human Rights Commission (NHRC) said it had taken suo motu cognisance of media reports and issued the notice to the state’s chief secretary.

The Commission has observed that the contents of the media report are “painful and indicative of insensitive and negligent attitude” of the doctors at the hospital where most of the visitors are from poor families.

The commission has sought a detailed report from the chief secretary within four weeks, including information on ambulance services offered by the government-run hospital.

In a video which went viral recently on social and electronic media, 45-year-old labourer Udayveer alleged that doctors at the Etawah government hospital did not treat his son Pushpendra and turned him away.

He was forced to carry the body of his 15-year-old son on his shoulder after he was allegedly denied help by doctors at the hospital on May 1.

Citing the report, the NHRC said, “The doctors at the hospital neither offered the ambulance service to the father of a deceased boy nor informed him about the facility to take his son’s body back home.”

“As a result, he carried the body of his son, on his shoulders. Reportedly, the doctors spared a few minutes to see the 15-year-old patient and told his father to take him away as there was no life in his body,” it said in a statement.

The incident amounts to violation of human rights, it said.

The NHRC has also observed that the Chief Medical Officer of Etawah district, Rajeev Yadav, has reportedly admitted that the “fault was on their side” and he has assured that strict action will be taken against the guilty.

“He has further added that the boy was brought dead to the hospital when the doctors were busy with a bus accident case and they could not ask from the father of the deceased, whether he needed a transport,” the NHRC said.

The Commission has sought information on the number of ambulance vehicles and drivers available in the hospital.

It has also sought to know whether information on the availability of ambulance service for carrying a patient or a body has been put at a conspicuous place, and details of the formalities required to be fulfilled for availing the service, the NHRC added.

The country was shocked to see images of Dana Majhi carrying his wife’s body slung over his shoulder for 10 km to reach his village in Odisha’s Kalahandi district after being denied help from the hospital authorities. Since the incident in August, similar cases have come to light. PTI