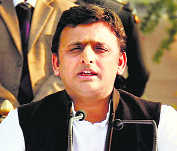 Addressing a press conference to mark the halfway point in his five-year term, Adityanath claimed Uttar Pradesh has set a record in implementation of central schemes. “In the past two and a half years, Uttar Pradesh has been pulled out from a state of identity crisis as we converted challenges to opportunities,” he said.

“The biggest achievement of my team has been changing the perception of Uttar Pradesh and restoring its identity," the BJP leader said.

“Strengthening law and order in the state has played an important role in changing its perception. There has not been a single incident of 'danga' (riot) in the state in the past two-and-half years," he said, apparently referring to large-scale clashes.

Adityanath claimed that dreaded criminals have either fled the state or are behind bars. "There has been a sharp decline in dacoity, rape, extortion-kidnapping, loot and clashes,” he said.

Referring to the safety of women, particularly minors, the chief minister said the Protection of Children from Sexual Offences (POCSO) Act has been enforced strictly, and the pace of prosecution stepped up.

Their remarks came amid the row over a student alleging rape by former Union minister Swami Chinmayanand in Shahjahanpur, and the earlier charges of kidnapping and rape against expelled BJP MLA Kuldeep Singh Sengar in Unnao. — PTI