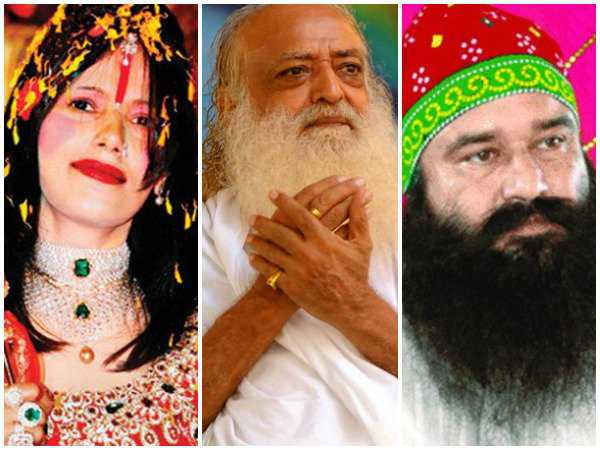 In the list of 14, the Akhil Bharatiya Akhara Parishad has asked the government to amend new laws against the "fake gurus".

Following are the names:

Asaram Bapu and Dera chief Ram Rahim are already lodged in jails and facing charges of rape. While another self-style godman Rampal from Haryana is also lodged in Hisar district jail and facing many cases.

Earlier this month, the Haryana and Punjab high Court ordered the Punjab Police to file a FIR on Radhe Maa, aka Sukhvinder Kaur, a spiritual leader based in Borivali suburb of Mumbai, in a case.  Radhe Maa poses herself as an incarnation of a Hindu goddess.

Nirmal Baba is a famous spiritual leader on the TV and has many followers. He was slapped with over Rs 3 crore tax evasion charge in  February 2014 and the Allahabad High Court has also ordered information and broadcast ministry to probe Nirmal Baba’s TV programmes, which allegedly encourages superstition and black magic.

Narayan Sai, son of Asaram Bapu, is also facing many charges, including molestation. He owns properties and investments of over Rs 5,000 crores and is presently lodged under judicial custody.

The move by the top body of Hindu religious leaders was prompted by the recent rape conviction and jailing of Gurmeet Singh Ram Rahim, the head of Dera Sacha Sauda, a quasi- religious body based in Sirsa in Haryana.

There is a very strong feeling among saints that because of misdeeds of just one or two religious leaders, the entire community was being shown in a bad light, Vishwa Hindu Parishad (VHP) Joint General Secretary Surendra Jain said.