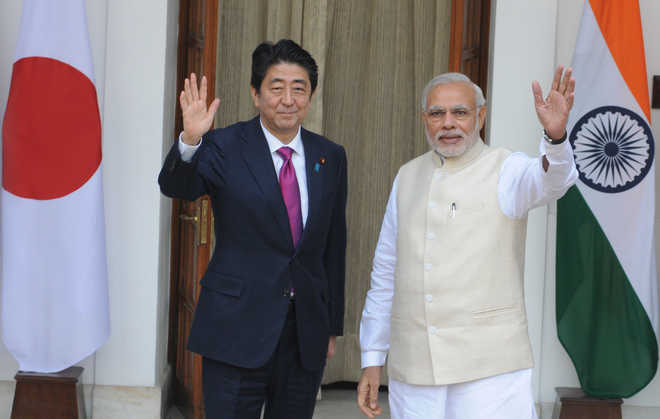 The visit of Abe, who arrived here on Friday on a three-day official sojourn, is expected to see progress towards India's first bullet train.

Prime Minister Modi emphasised that he wanted India and Japan to move ahead together, not just in the sphere of high-speed trains, but also for "high-speed growth".

He said recent economic indicators in both India and Japan were extremely encouraging, especially in the light of the global economic slowdown.

The Prime Minister said the ‘Make in India’ initiative has become a movement in Japan and the island nation has created a fund of about $12 billion for it.

“Today, there is a ‘Make In India’ movement in Japan. I have been told that $11-12 billion fund has been earmarked for it. This clearly indicates how both the countries can move forward,” he said while addressing the India-Japan Business Leaders Forum here.

‘Make in India’ is proceeding in mission mode, not just in India, but also in Japan, he added.

Modi also said that for the first time Japan will import cars from India.

Recalling his last visit to the country, Modi said Japan committed an investment of $35 billion.

“The figure had surprised many at that time, but today, within a short time-span, unimaginable progress had been made, and the contours of this investment were beginning to get visible on the ground,” he said.

Highlighting the improvement in economic indicators in both India and Japan, he said these were extremely encouraging, especially in the light of the global economic slowdown.

“It is clear that India is a land of possibilities,” he added.