Pilibhit we’ve forgotten: 7 ''murders'', brutality that were buried in UP : The Tribune India

Pilibhit we’ve forgotten: 7 ''murders'', brutality that were buried in UP

When a CBI special court awarded life imprisonment last month to the 47 policemen held guilty of a 1991 fake encounter in Pilibhit, in which 10 Sikh pilgrims were gunned down, attention was drawn to an equally horrifying incident of human rights violation inside the Pilibhit district jail on the night of November 8-9, 1994. 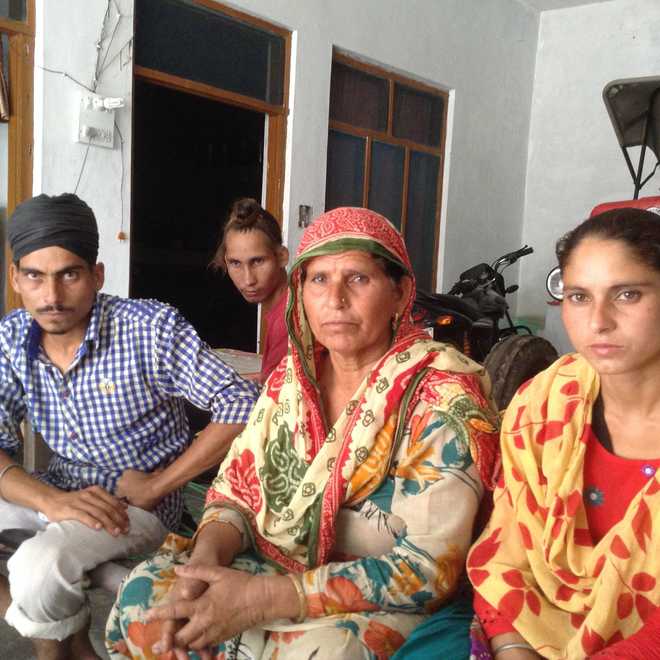 Sukhwant Kaur, whose brothers-in-law were among 28 beaten up in jail, with family. One died, other was injured and shifted to Amritsar after release; her husband died of heart attack, “pained by all this”. Photo: Shahira Naim

When a CBI special court awarded life imprisonment and hefty fines last month to the 47 policemen held guilty of a 1991 fake encounter in Pilibhit, in which 10 Sikh pilgrims were gunned down, attention was drawn to an equally horrifying — but largely unknown and forgotten — incident of human rights violation inside the Pilibhit district jail on the night of November 8-9, 1994. What became of the inquiry?

Related Story: Lives scarred: ‘So-called terrorists from Punjab hid in fields, demanded food. If we obliged, police would get us and if we refused, they gave us hell’

Twentyeight TADA detainees lodged in barrack number 7 were taken to another barrack, tied up and brutally beaten up by the jail staff led by the then Jail Superintendent, Vindhyachal Singh Yadav. Six were “brought dead” to the Pilibhit District Hospital over a period of 12 hours.

One critically injured undertrial — Vichitra Singh — was referred to the King George Medical College in Lucknow, where he died 12 days later. The remaining 21 remained admitted to hospital with serious injuries and were sent back to the prison after they recovered. The physical wounds may have healed, but the incident scarred their lives and the lives of their families forever.

Most were in jail on charges of harbouring terrorists.

The UP government under Yadav in 2007 quietly withdrew the Crime Branch-Crime Investigation Department inquiry and the pending court case without anyone getting an inkling, until now — when local veteran journalists sought to know the status of the case after the fake encounter ruling.

On the day the detainees were taken to hospital, an FIR was lodged against unnamed jail personnel by the then Samajwadi Party district president Giani Tarlok Singh, who is no more. On the basis of the FIR and mounting pressure, the then Pilibhit district magistrate Shalini Prasad had recommended a CB-CID probe.

Then a senior Samajwadi Party functionary and social worker Haroon Ahmad, who was instrumental in getting the FIR lodged, is horrified to learn that all the accused in the case have been spared.

“I had first learnt about the brutal beating to death of the Sikh prisoners in jail when I had gone to the district hospital to meet someone on November 9, 1994. I had deliberately made Gianiji file an FIR as he was from the same community and I thought it would help put pressure,” says the 65-year old leader, who has since parted ways with the Samajwadi Party.

A senior lawyer and office-bearer of the Pilibhit Joint Bar Association who had followed the case closely is equally shocked. On the condition of anonymity, he says, “When the state government had granted permission to prosecute PCS officer Vindhyachal Singh Yadav and the CB-CID filed a chargesheet against him and 41 other jail personnel, then prima facie they must have collected sufficient evidence against them. What caused the U-turn by the government of the same party is truly intriguing,” says the lawyer.

The jail authorities had then claimed that the TADA detainees had been injured and some of them died in a clash with the jail staff, “who had aborted their bid to escape from jail”.

However, the then Pilibhit bureau chief of Hindi daily Amar Ujala, Vishwamitra Tandon, recalls that the bodies and the condition of the injured prisoners suggested no such clash. “It was clearly a one-sided affair where the jail staff had suffered superficial injuries while the prisoners had been tied and beaten to death or incapacitated. The first edition of my newspaper had given a headline which spoke of TADA prisoners dying in a clash with the jail staff. I persuaded my office to change the headline, calling it outright custodial killing,” remembers Tandon.

Substantiating Tandon’s stand is Dr Gyan Prakash, who was on emergency duty at the Pilibhit district hospital on that fateful day of November 9, 1994. “I had personally attended to the prisoners. The injuries were not the kind suffered in a ‘clash’. Their injuries were of a very serious nature and were evidently sustained in a one-sided affair,” recalls Dr Prakash.

What negates the state government’s 2007 stand of invoking Section 321 of CrPC to withdraw the cases is the UP Department of Home’s own order of January 16, 1995 issued by the Principal Secretary, Jails, on the orders of the Governor, allowing action to be taken against Vindhyachal Singh Yadav in a court of law.

The four-page report gives a graphic description of the sequence of events. The jail staff reportedly found an iron rod unfixed in barrack number 7 and mentions an attempt to escape. The 42 jail staff present then collected all the personal belongings of the prisoners and set these on fire.

“...prisoners Sukhdev Singh, Labh Singh, Tarsem Singh, Karaj Singh were taken out of barrack number 7 to the open field east of barrack number 4, their legs were tied and with the intention of killing them, they were beaten up with lathis. After that, the remaining prisoners were also taken to the same place, legs tied and with the intention of killing they were beaten. Thereafter, the injured prisoners were locked in barrack 4,” states the report of the Principal Secretary, Jails.

The report notes that “as per the statements, it is clear that the prisoners died due to the injuries suffered. To save themselves from the criminal law, the personal belongings of the prisoners were destroyed to do away with evidence”.

The CJM’s closure order states that the CB-CID counsel stressed on the withdrawal citing Section 321 of CrPC —  that provides for withdrawal of cases for acts committed by government officials “while acting or purporting to act in the discharge of official duty”.

The CJM closure order reports that the CB-CID public prosecutor argued that a cross case had been registered by Yadav in which the deceased TADA prisoners were accused of making an attempt to escape and the jail staff had taken action in which 12 jail personnel suffered injuries.

The CB-CID public prosecutor stated that a case had been filed against the jail staff by SP’s Pilibhit president for political reasons. “As there is no independent witness in the case, hence the inquiry should be withdrawn,” contended the CB-CID counsel Gangwar.

The CJM noted that “in this matter there is no apparent reason on the basis of which the plea to withdraw prosecution should be turned down”.

In the intervening dozen-odd years, while the CB-CID inquiry was technically on, the  jail staff did not really suffer. One guard, Anokh Singh, was arrested and released on bail. The remaining chargesheeted accused went to the Allahabad High Court, which stayed further proceedings.

The government did not challenge the High Court stay and the case remained in animated suspension till it was given a quiet burial by the Mulayam Singh Yadav government in 2007.

It was a one-sided affair where the jail staff suffered superficial injuries while prisoners were beaten to death. My paper gave a headline which spoke of TADA prisoners dying in a clash. I got it changed to outright custodial killing - Vishwamitra Tandon, Veteran Journalist

I had personally attended to the prisoners. The injuries were not the kind suffered in a ‘clash’. They had been cruelly beaten. Their injuries were of a very serious nature and were evidently sustained in a one-sided affair - Dr Gyan Prakash, On duty on fateful day