India one of most open economies, says PM Narendra Modi

NEW DELHI: Pitching for foreign investments, Prime Minister Narendra Modi on Tuesday said India is one of the most open economies in the world and is ready to do business with the world. 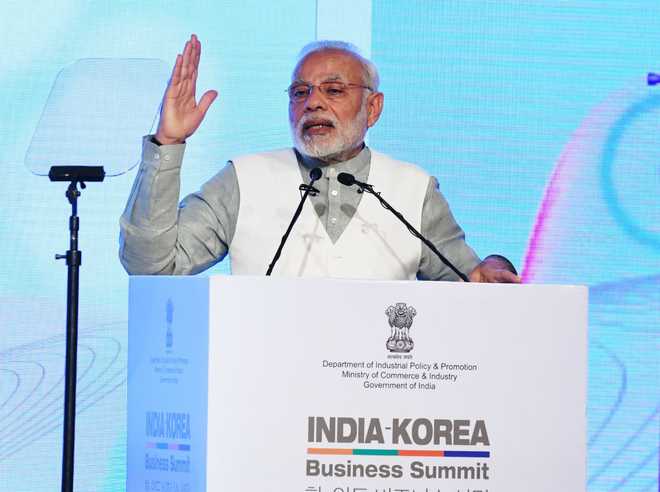 Pitching for foreign investments, Prime Minister Narendra Modi on Tuesday said India is one of the most open economies in the world and is ready to do business with the world.

Speaking at the India-Korea Business Summit, he said his government had worked towards creating a stable business environment and removed arbitrariness in decision-making.

“We seek positivity in day-to-day transactions. We are widening areas of trust rather than digging into doubts. This represents a complete change of the government’s mindset,” he said.

India, he said, is already the third-largest economy in terms of purchasing power. “Very soon, we will become the world’s fifth-largest economy by nominal GDP. We are also the fastest-growing major economy of the world today,” he said.

“We are also a country with one of the largest start-up eco-systems,” he added.

Stating that the government is on a de-regulation and de-licensing drive, Modi said validity period of industrial licences had been increased from three years to 15 and more.

“If you see around the globe, there are very few countries where you have three important factors of economy together. They are: democracy, demography and demand. In India, we have all the three together,” he said.

To the Korean businessmen, he said India is now ready for business and promised to do whatever is required to “promote and protect” their investment. PTI