CHANDIGARH: The Punjab Police today said they had evidence to suggest international conspiracy behind the sacrilege of Guru Granth Sahib at Faridkot’s Bargari village on October 12. 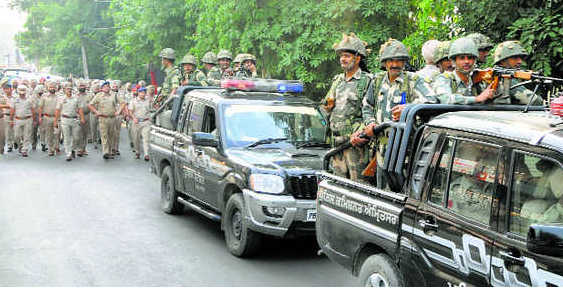 BSF personnel and policemen carry out a flag march in Amritsar on Tuesday. Photo: Vishal Kumar

The Punjab Police today said they had evidence to suggest international conspiracy behind the sacrilege of Guru Granth Sahib at Faridkot’s Bargari village on October 12. This comes on a day when the Centre deployed 10 Border Security Force companies, comprising 1,000 personnel, at Amritsar, Jalandhar, Ludhiana and Tarn Taran.

Deputy Chief Minister Sukhbir Singh Badal, addressing mediapersons in the presence of senior Akali leaders, said: “We have unearthed the conspiracy. We urge everyone to maintain peace and communal harmony. The perpetrators of the crime will get a stringent punishment.”

Additional Director General of Police IPS Sahota, who headed a special investigation team to probe the incident, told mediapersons that the two, in their twenties, came under the police radar on suspected links with some radical elements in the past.

In the Kohrian (Sangrur) incident, the police today arrested one suspect, Hardev Singh.

The Bargari sacrilege was the first of seven such incidents reported in the state. The other cases were reported from Ferozepur, Bathinda, Sangrur, Amritsar, Ludhiana, and Tarn Taran.

“Out of the seven reported cases of sacrilege of Guru Granth Sahib, we have solved five,” said Sahota.

The police said so far there was no evidence to suggest foreign link in other cases or if the cases were interlinked.

The police also claimed the incidents were not linked to the recent pardoning of Dera Sacha Sauda chief by the Akal Takht, but did not rule out the involvement of terror organisations behind sacrilege.

Sahota said Rupinder was the more active of the two brothers. Rupinder became a baptised Sikh only six months ago. Their father ran a small shop in the village. The ADGP claimed the two acted for money. Both went into hiding after the incident.

On October 15 at 10.37 am, Rupinder and Jaswinder are allegedly heard talking over the phone discussing a meeting with a youth, Aman, and an unidentified person. They discuss pages of Guru Ganth Sahib.

In the second call on October 16 at 10.45 pm, an unidentified caller from an undisclosed location in Australia and Rupinder allegedly discuss bank accounts and ATM card numbers. The state BJP core group that met today sought exemplary punishment for those behind the conspiracy. The meeting discussed the administrative failure to act in time. BJP state chief Kamal Sharma appealed to the public to restore normalcy ahead of the festival season.

The Centre today deployed at least 10 companies, three each at Amritsar, Jalandhar and Ludhiana, and one at Tarn Taran.

Sources in the government said they had demanded extra forces from the Centre on Monday after Union Home Minister Rajnath Singh spoke to Chief Minister Parkash Singh Badal.

With the three arrests today, the police have arrested seven persons, including Jagdish Singh (a disciple of Damdami Taksal) and his wife Lakhwinder Kaur for Jandiala sacrilege in Amritsar; and Balwinder Kaur and Sikandar Singh for sacrilege in Gwaddi near Ludhiana. The police are closing in on a third accomplice who is believed to have paid money to Balwinder to allegedly desecrate Guru Granth Sahib.

Sukhbir, who also holds the portfolio of Home Department, told The Tribune they were looking at a larger conspiracy behind these incidents.

“Our investigation is aimed at trying to find out if there is a pattern to these incidents and pin point the correlation between these incidents (if any). Punjab is a border state and peace cannot be sacrificed for ulterior motives. Strict instructions have been issued to the police to act with extreme caution since it concerns religious sentiments of the people. All arrests are being made only after thorough investigation. I am monitoring the situation and keeping tabs on the investigation,” he said.

Sukhbir said their thrust had been to catch the culprits. “It’s not that the government was sitting as a mute spectator. We needed to have something concrete to show to the protesters. The arrest will help quell protests, as it is an emotional issue,” he said.

The Deputy Chief Minister later briefed his Cabinet colleagues about the police probe. The Cabinet adopted a resolution condemning the incidents of sacrilege.

Rupinder: Aman will visit you with another person. Arrange a meeting with me. How will we do it?

Jaswinder: (I fear) this may expose (the matter)

Rupinder: The task is important. He has some stuff of Maharaj…pages

Jaswinder: The torn ones or the other…..?

caller (from australia): Give your phone no. to someone. We are outside. We can’t come

Rupinder: I am afraid the stuff may get in wrong hands caller: They may deliver it at your place

Rupinder:Give my account number and ATM card to the Singhs. They may keep giving (money) as per services taken caller: Give me your account. I will deposit

The sixth edition of the World Kabaddi Cup, scheduled from November 14 to 28 in Punjab, has been cancelled following incidents of sacrilege. Deputy CM Sukhbir Singh Badal, who also holds the sports portfolio, on Tuesday said holding such a tournament “at a time when the entire Sikh community is in grief” was not appropriate.