NEW DELHI: The Congress on Thursday levelled the most serious set of accusations on Prime Minister Narendra Modi in the Rafale deal, saying he compromised national security to ulterior ends and bypassed established procedures and laws. 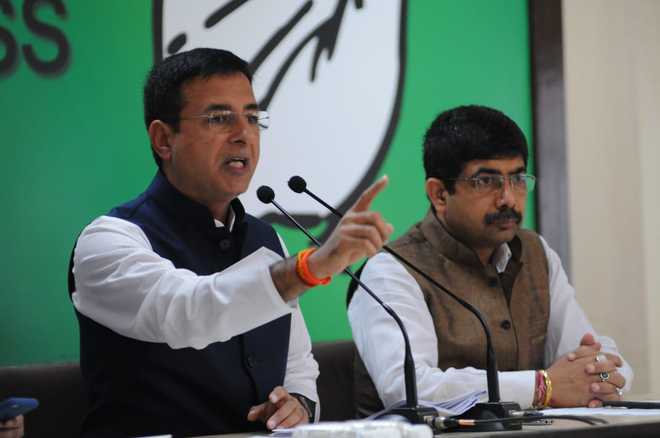 The Congress on Thursday levelled the most serious set of accusations on Prime Minister Narendra Modi in the Rafale deal, saying he compromised national security to ulterior ends and bypassed established procedures and laws.

Fielding its media head Randeep Surjewala to reiterate the demand for a joint parliamentary committee probe into the deal, the Congress suggested that the outcome of the Rafale petitions in the Supreme Court would not impact its own demand for an investigation into the contract.

“The Supreme Court has constitutional limitations on the matter and cannot look at file notings which reveal the truth of the Rafale. The court is not an enquiry office. The facts will emerge when the JPC summons files of the meetings of Cabinet Committee on Security, Defence Acquisition Council and the price negotiations committee,” Surjewala said, citing “facts” from government files which he said had now been confirmed publicly by one Sudhanshu Mohanty, a retired officer who dealt with finance in the Defence Ministry.

Surjewala made serious accusations on the PM alleging that he overruled his own defence minister Manohar Parrikar and the defence acquisition council by raising the benchmark price of 36 Rafale jets from some 32,000 crore to over 62,000 crore.

The Congress leader also said that the PM ignored the file advice of the Law Ministry and the air acquisition wing of the Air Force to insist on a sovereign bank guarantee from France for the deal signed in April 2015.

The government told the SC hearing Rafale petitions on Wednesday that the French Government didn’t give a sovereign guarantee and only gave a letter of comfort for the deal.

“Even on arbitration, the PM overlooked the suggestions of the Law Ministry and defence experts who said the partners in arbitration should be the Governments of India and France rather than the Government of India and a private supplier. The PM told the Parliament that the Rafale deal was an inter-government agreement between two nations. How is this an inter-government agreement when the arbitration clause is between India and Dassault? The PM by ending the legal requirements to have the arbitration seat in India and by also changing the partners between whom arbitration will happen betrayed national interest,” Surjewala alleged.

Fourthly, the Congress asked how NSA Ajit Doval was negotiating the jet price in Paris in January 2016 when the price negotiation committee for the deal was still deliberating the issue and submitted its report in August that year.

How was an extra constitutional authority allowed to negotiate outside of the committee and under whose authority? Surjewala asked.

To a question on how he was quoting the benchmark price for the deal when the controversial matter of pricing was pending before the court, Surjewala said “we are quoting from files, let the government deny.”

The government has argued before the Supreme Court that disclosure of the deal price would benefit Indian enemies and should be kept a secret.

The latest skeleton to tumble out of the RAFALE cupboard:

NO Guarantee by the French Govt. backing the deal.

BUT, our PM says there’s a letter from the French promising to be faithful! That’s enough to call this a “Govt to Govt” deal?#BikGayaChowkidar pic.twitter.com/Epw3J62JbV