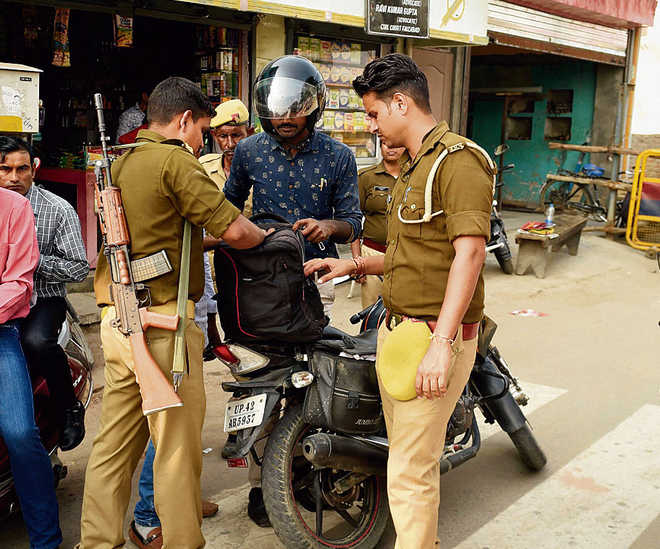 Security up in Ayodhya. PTI

The Supreme Court will pronounce on Saturday its verdict on Ram Janmabhoomi-Babri Masjid land dispute in Ayodhya. A five-judge Bench headed by Chief Justice of India Ranjan Gogoi will pronounce the judgment at 10.30 am, the top court announced on its website.

The Bench, which also included Justice SA Bobde, Justice DY Chandrachud, Justice Ashok Bhushan and Justice S Abdul Nazeer, had reserved the judgment on October 16 after marathon day-to-day hearing which went on for 40 days. The Bench will be deciding on 14 cross-appeals against the Allahabad HC’s September 30, 2010, judgment equally dividing 2.77 acre disputed land between Ram Lalla, Nirmohi Akhara and Muslims.

Ahead of the verdict, Chief Justice Gogoi on Friday held a meeting with Uttar Pradesh Chief Secretary Rajendra Kumar Tiwari and DGP Om Prakash Singh to take stock of the situation.

On Thursday, the Centre sent advisories to all states and UTs to remain alert and ensure security in sensitive areas.  The MHA has dispatched 4,000 paramilitary personnel for security deployment in UP even as the state government imposed Section 144 of the CrPC across the state. A general advisory has already been sent to all states and UTs asking them to deploy adequate security personnel in all sensitive places and ensure that no untoward incident takes place.