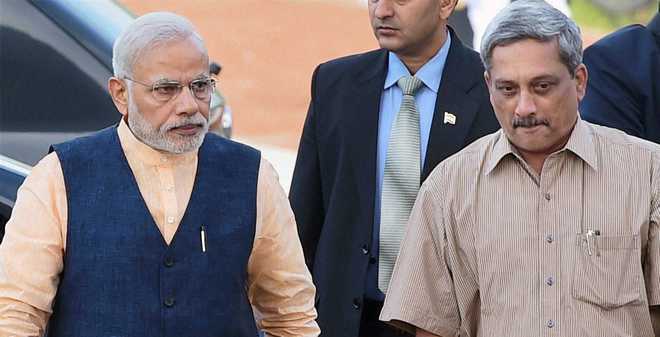 A letter from the services to Modi and Parrikar seeking better wages is not unprecedented. PTI file photo

Seeking a quick redress against shortcomings of the 7th Central Pay Commission (CPC), the three armed services — The Army, IAF and the Navy — have collectively written to Prime Minister Narendra Modi and Defence Minister Manohar Parrikar.

The Ministry of Defence (MoD) has not issued the notification in regard to enhanced pay like other Central Government employees, who will get higher wages from September 1. The notification has been held up as issues raised by the three services are being considered.

The three forces have recently sent a collective letter through the office of the Chairman of Chiefs of Staff Committee (CoSC) – the CoSC being the senior most among the Chiefs of the three services. Air Chief Marshall Arup Raha, the IAF Chief, is the present CoSC.

A letter from the services to Modi and Parrikar seeking better wages is not unprecedented. After the Sixth Pay Commission, the services had faced a similar “lowering of status”. The then CoSC, Admiral Sureesh Mehta (now retired) had shot off a letter to the UPA-I regime. A high-powered committee was set up in 2008 under Pranab Mukerjee (then a minister in Manmohan Singh’s Cabinet) to study the matter.

The services, in their letter, have pointed out four key issues that need to be addressed and lift the morale of the forces. The first is how the salaries of the service officers have been “artificially suppressed”. The formula applied for basic pay fixation is different than the one applied to other Central Government employees. As a result, in each rank the service officers have ended up being lower in pay scales.

In the government, facilities like car, housing, or sanctions for air travel depend upon the basic pay.

The second is the non-acceptance of the demand for non-functional upgrade (NFU). After the last pay commission (the sixth), the government allowed “non-functional scale upgradation” and allowed Group-A officers to get the same scale as a Joint Secretary, but after 24 years of service.

Strangely, the armed forces are neither classified as group “A” services nor are they termed as “Central services” like the IAS or the IPS and did not get NFU. Now, with others getting NFU the gap gets widened.

The third issue is higher military service pay (MSP) for junior commissioned officers (JCOs). They rise from the lower ranks (jawans). The 7th CPC has clubbed the MSP of JCOs and jawans at Rs 5,200. The demand is to have it at Rs 10,000 for the JCOs. The MSP for officers between Lieutenant-rank and Brigadier-rank is common at Rs 15,500.

The fourth main issue is lowering of disability pension. As per the new formula, okayed by the 7th CPC, soldiers/officers with 100 per cent disability will see their pensions reduced from the current levels. However, in case of the disabled of other services their perks will rise.