“Extremely pained to learn of the killing of Assam Rifles'' JCO and jawans in Manipur. 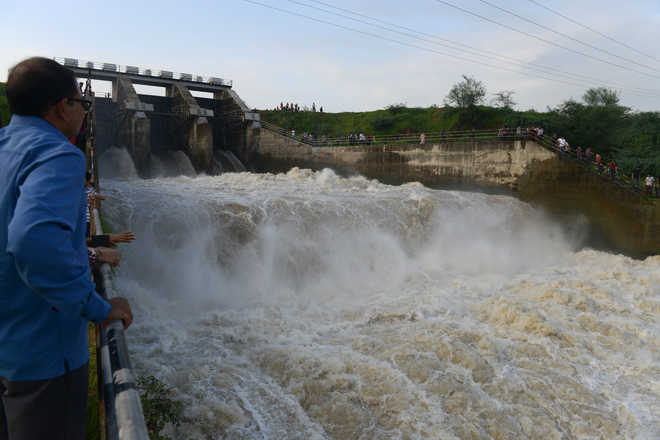 Water gushes out of the Narmada canal and flows into the Sabarmati in Gandhinagar. file photo

With most parts of Gujarat reeling under a severe heat wave and shortage of water looming large owing to inadequate rainfall in the last two years, questions are being raised about the failure of subsequent state governments in drawing out a plan for execution of the Sardar Sarovar dam on the Narmada, fondly called the “lifeline of Gujarat”. The life of bulk of the rural masses depends on this only perennial river in the state.

As the BJP has been in power in the state for more than 20 of the 36 years since the announcement of the Narmada tribunal’s award, the party cannot shirk the responsibility for inadequacies in the implementation of the project.

Though the BJP has always squarely blamed the Congress government at the Centre for the delay in implementation of the dam project, it has no explanation for the lack of coordination in constructing the minor and sub-minor canals, which were solely the state’s responsibility.

More shockingly, the emphasis seems to be slowly shifting from the “lifeline” for the poor farmers to “lifeline” for the rich industrial houses. The state government’s handling of the water resources is dashing the hopes of the farming community that irrigation would continue to get the lion’s share of the Narmada dam water as was originally conceived. On the contrary, the farm sector is apprehensive that by the time the “review” for water sharing by various sectors becomes applicable in another nine years, the bulk would go to the industrial and urban sectors.

The tribunal’s award in 1979 provided for “review” of water sharing after 45 years.

Mainly meant to provide irrigation to the low rainfall areas of the Kutch-Saurashtra and the north Gujarat regions, the Narmada dam project was conceptualised in the mid-Fifties but because of a series of inter-state disputes, it took more than 25 years for the tribunal to finalise its award for sharing between Madhya Pradesh, Gujarat, Maharashtra and Rajasthan the estimated 27 million acre feet of water available in the Narmada river and the hydel power to be generated. The final award allocated 9 MAF of water to Gujarat, of which only 1.06 MAF was for non-agricultural purposes, including 0.86 MAF for drinking purposes to 131 small towns and 9,633 virtually ‘no source’ villages and another 0.20 million for industries. The remaining 8 MAF was to be utilised for irrigating 18.45 lakh hectares of land in 15 districts.

The success of any dam project depends on completion of the minor and sub-minor canals that actually take the water to the fields, but Gujarat badly lacked in planning its execution. The project envisaged construction of 74,296-km canal network but the state in 36 years has constructed only 27,189 km, largely the main canal. Even as the dam height has reached its final level of 138 metres, though it is still not permitted to close the sluice gates at the level of 122 metres, the state could supply Narmada waters for irrigation to only 3.70 lakh hectares, a far cry from the target of 17.92 lakh hectares.

The areas covered last year were mostly in the well-irrigated central Gujarat regions and some parts of north Gujarat, while most parts of the arid Kutch-Saurashtra regions are still dependent on the monsoon.

Compared to irrigation, the Narmada water to the industrial sector has already far exceeded the quota, more than 0.25 MAF as against the allocation of 0.20. In fact, almost every water-intensive industry planning to set up projects in the state is showing Sardar Sarovar as the main source of water supply. The government while attracting investments in Sanand, for example, has promised supply of up to 90 lakh litres of Narmada water per day while the agricultural fields less than a kilometre away are starved of it.

Even the major cities like Ahmedabad, Vadodara and Rajkot and scores of smaller towns have started to depend solely on the Narmada water for daily needs as water available from the traditional sources has become inadequate.

The success of Prime Minister Narendra Modi’s pet “Sabarmati River-Front Development Project” depended on the availability of water in the usually dry river and the state government turned to Narmada to maintain a steady supply of water to Sabarmati flowing through the middle of Ahmedabad city. None of these were in the Narmada tribunal’s award.

The farm sector, however, is not allowed any such luxuries, and the farmers suffer heavy fines if reported of “stealing” Narmada waters from the canals.

Out of power for the last two decades, the Congress in Gujarat has for the first time planned a programme that it hopes would take the party nearer to the people before the Assembly elections due in December, 2017. Though nothing innovative, the “Lok Darbars” in different districts was expected to help the Congress, at least to some extent, counter the BJP’s “Garib Kalyan Melas” initiated by Modi as CM.

Though the Anandiben Patel government has not yet started organising the “Kalyan Mela” series but she is certain to launch it, maybe in a new garb, as it had proved highly successful to woo the rural voters, particularly the weaker sections.

Not that Modi was doling out any favour to the poor; he was only distributing from one platform various assistances they were due to get under different schemes of the Central and the state governments.

State Congress president Bharatsinh Solanki has also launched a website and a mobile app to reach out to a larger number of people. It would be the first time in 20 years that the Congress would be visible among the people other than holding mere protest rallies.