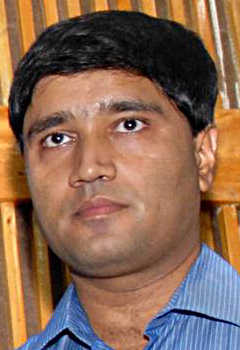 Citing “relentless persecution”, whistleblower bureaucrat Sanjiv Chaturvedi has asked Prime Minister Narendra Modi to disclose the details of a 2014 conversation he had with then Union health minister Harsh Vardhan.

The conversation between Modi and Vardhan led to his removal as anti-corruption officer of the All India Institute of Medical Sciences, Chaturvedi has said in a letter to the prime minister on February 28.

Though the letter was written in February, the contents of the letter have been accessed only recently.

Chaturvedi has sought action against those responsible for harassing him as well as disclosure of information related to the status of investigation of corruption cases against serving central ministers, in accordance with a recent order of the Central Information Commission.

In his letter, Chaturvedi said he was subjected to “relentless persecution” and dragged into “endless litigations” in more than a dozen court cases across four high courts, tribunals and Supreme Court after the phone conversation between Modi and Vardhan on August 23, 2014.

The telephonic conversation was on the issue of removing Chaturvedi from the post of chief vigilance officer, All India Institute of Medical Sciences (AIIMS), according to the response to an RTI query filed by Chaturvedi.

“A detailed note in this regard is submitted for perusal of Hon’ble Prime Minister of India,” the letter said.

In his letter to the prime minister, Chaturvedi has cited a May 2014 file noting of then health secretary mentioning his “exemplary performance” as CVO. He has also cited the Parliamentary Committee Report of August 2015, which “strongly deprecated the non-serious approach of the Ministry towards tackling such a large number of cases of corruption at AIIMS”.

Recently, in a case related to award of zero grading into his annual performance report, Uttarakhand High Court termed the central government/AIIMS “vindictive” and imposed a fine of Rs 25,000.

This order was upheld by the Supreme Court, which imposed a further fine of Rs 25,000.

Chaturvedi is a 2002 batch officer of India Forest Service and exposed a series of corruption cases during his tenure as AIIMS CVO between 2012 and 2016.

He won the Ramon Magsasay award in 2015. PTI