SHIMLA: Considering poor financial health of the state, all the four new medical colleges in Himachal will be run by a society under the self-financing scheme like the pattern adopted by some other states like Gujarat. 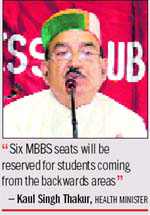 Considering poor financial health of the state, all the four new medical colleges in Himachal will be run by a society under the self-financing scheme like the pattern adopted by some other states like Gujarat.

“Since the financial health of the state is not too good, we have decided to run the four new medical colleges at Nahan, Chamba, Hamirpur and Ner Chowk in Mandi under the self-financing scheme,” stated Health and Family Welfare and Revenue Minister, Kaul Singh Thakur at a Meet the Press here today.

He said the matter regarding the setting up of a Society like Gujarat to run the medical colleges would be placed before the Cabinet shortly. “Though no amount has so far been fixed the education here will certainly cost less than most private medical colleges,” he said. He clarified that the admissions would strictly be on merit and there will be no nominated seats with the state government.

Thakur said Nahan Medical College would become functional from this year. With respect to the other three medical colleges at Chamba, Hamirpur and Ner Chowk, the state government had applied to the Medical Council of India (MCI). “The last date for applying for starting the medical colleges from next year was July 7 and we have applied to the MCI for 100 MBBS seats each at all the three places,” he disclosed.

Disclosing another significant step that the state government was contemplating, the minister said that at least six MBBS seats would be reserved at each of the medical colleges for the students from backward areas. “This provision was so far in place only at Indira Gandhi Medical College but now six seats each would be reserved for students from backward areas so that they too get an opportunity to get admission in these medical college”, he stated.

Thakur said that during its three year rule, the Congress regime had recruited a total of 2,500 doctors and other para-medical staff as compared to merely 473 during the five-year BJP rule. He said so far the Virbhadra regime had sanctioned 1,597 posts of Medical Officer, 497 staff nurses and 160 of pharmacists.

Thakur, who also holds the charge of Revenue, said efforts were on to get a project approved from the Centre for satellite settlement of revenue records rather than manually as the level of accuracy is very high. He added that 654 Patwaris had been trained and posted to tide over the shortage while process for filing another 1,120 posts of Patwaris was being undertaken.

Even as the government has made up its mind to start the Employees’ State Insurance Corporation (ESIC) medical college at Nerchowk under the self-financing scheme, the BJP and AAP said to benefit the common man, it must be run by the government.

Former minister and BJP leader Jai Ram Thakur said though the BJP would not oppose the decision of the state government to set up the college, the people would have benefitted if the college was run by the government.

The BJP leader said the people were not happy with the government’s move to begin the college under the self-financing scheme. He said the college would also cater to the health needs of those coming from Kullu, Lahaul-Spiti and Bilaspur.

Meanwhile, AAP has threatened to launch a protest against government.

“If it can run the medical colleges in Shimla and Tanda, why can’t it do the same in Mandi,” said AAP leader Lawan Thakur.

The ESIC medical college was expected to start in 2012

But due to change of guard at the Centre in 2014, the ministry refused to run the college

The medical college has 500 beds, 40-bed casualty department, one major OT and two minor OTs attached to the emergency. The hospital is equipped with 12 modular operation theatres with the facility of auto-transfer of medicines, injections, samples from store to wards