LEEDS:Australia closed in on a victory that will see them retain the Ashes after ending an incredible second day of the third Test with a lead of 283 runs, having bowled out England for an embarrassing 67 in their first innings. 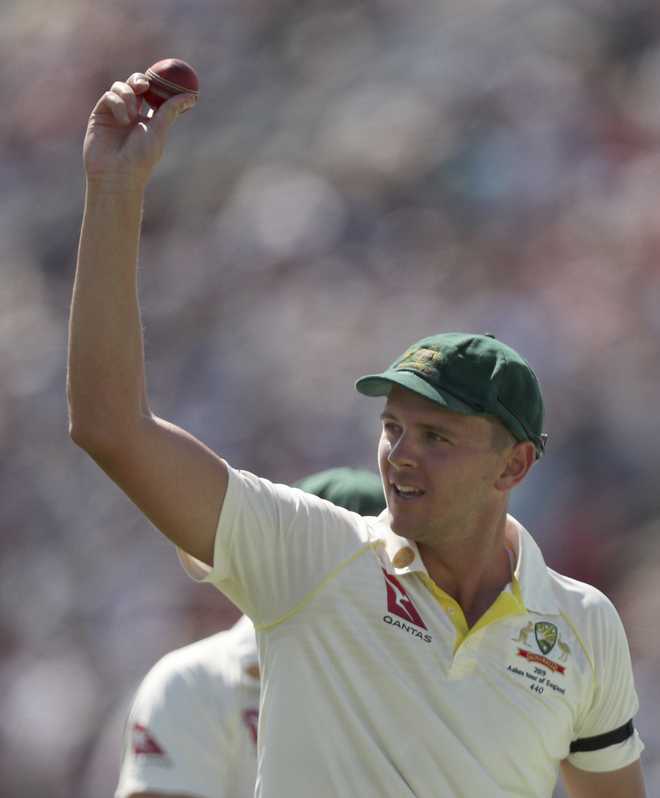 Josh Hazlewood holds up a match ball as he walks from the pitch after England were out for 67 with Hazlewood taking 5/30. AP/PTI

Australia closed in on a victory that will see them retain the Ashes after ending an incredible second day of the third Test with a lead of 283 runs, having bowled out England for an embarrassing 67 in their first innings.

Australia were on 171/6 in their second innings at the close at Headingley, with a sizeable advantage after England suffered a humiliating day at the crease.

Chasing Australia's 179 and trailing 1-0 in the five-match series, England lost cheap wickets and were dismissed for their 12th lowest Test innings total ever in glorious sunshine in Leeds. Joe Denly top scored with a measly 12 runs — the lowest ever highest score for an England batsman in a Test innings — with captain Joe Root, on his home ground, falling for his second duck in a row as the hosts' innings lasted less than 28 overs. Marnus Labuschagne (53*) added to their lead in the evening session, before two late wickets gave England some hope of salvaging the Test. As holders, Australia would retain the Ashes with victory as England could only draw the series. — Reuters

4Times England have been all out for less than 100 in Tests since 2018. No other team has suffered this more than once in this duration. In 37 innings, they have got out for less than 100 four times. The instances: 58 vs NZ at Auckland in March 2018; 77 vs WI at Bridgetown, 85 vs Ireland at Lord’s, and 67 vs Australia in this Test, all this year

1Number of smaller totals in Tests at Headingley than England’s 67 in this match. West Indies were all out for 61 in 2000, which is the lowest total at the venue. For England, the previous lowest total here was 76 vs SA in 1907