BATHINDA: Even as Punjab registered more than two times the number of deaths caused by fog in road accidents as compared to the neighbouring Haryana, the state has failed to take any step even after an advisory in this regard was issued by the traffic advisor of Punjab. 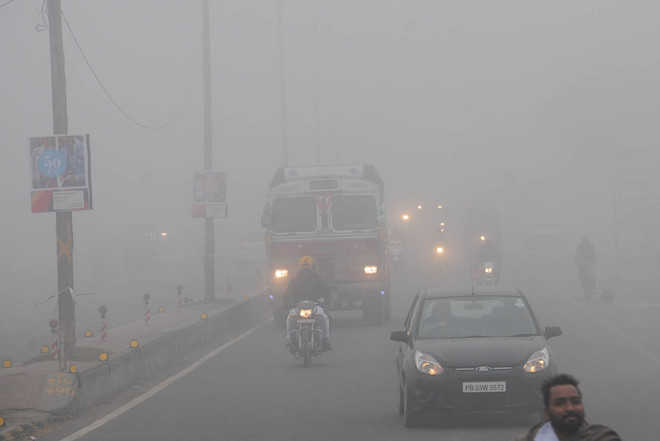 Fog has been responsible for causing a number of accidents in the region. A Tribune Photograph

Even as Punjab registered more than two times the number of deaths caused by fog in road accidents as compared to the neighbouring Haryana, the state has failed to take any step even after an advisory in this regard was issued by the traffic advisor of Punjab.

Even as figures for the year 2015 are yet to be released, in 2014, Haryana registered 263 deaths while 605 persons were killed on Punjab roads due to fog.

NGOs and traffic police officials said an alarming number of deaths were reported in the last year as well.

These figures were released by the Ministry of Road Transport and Highways, which also revealed that in Haryana, 724 accidents occurred due to fog in 2014.

In Punjab, 636 persons got seriously injured in road accidents that occurred due to reduced visibility caused by thick fog cover.

“It becomes extremely important for the authorities to prepare for the foggy conditions and ensure safe mobility in the state. But hardly anything has been done in this regard,” said Traffic Advisor of Punjab, Navdeep Asija.

He said an advisory had been sent to the government for cleaning of unwanted vegetation along the roadsides all over the state after the monsoon season.

The vegetation growth along the roadside reduces the effective carriageway area by 10 to 15 per cent, he added.

At the time of low visibility or foggy conditions, vegetation along the roadsides becomes critical and sometimes the reason for road crashes.

The PWD, Mandi Board or other agencies don’t have adequate manpower to regularly clean excessive vegetation or to clean up drains.

Most of the roads do not have adequate MNREGA workforce that can be utilised for the cleaning of unwanted vegetation growth within the ‘clear zone’ of a road.

In Urban areas of Mohali, Jalandhar and Amritsar, it has also been observed that unsafe sharp edge railing has been installed along the roadside in medians.

So far over a dozen serious road accidents have been reported in December and January in almost every district of Punjab. Four members of a family were killed on Dabwali road last month in Bathinda and drivers of a truck and jeep received serious injuries last night.