NEW DELHI: Within 48 hours of Pakistan Army Chief General Qamar Javed Bajwa having assured Army’s ‘full support’ to the ‘Kashmir cause’, he has been given a three-year extension in service by Pakistan Prime Minister Imran Khan. 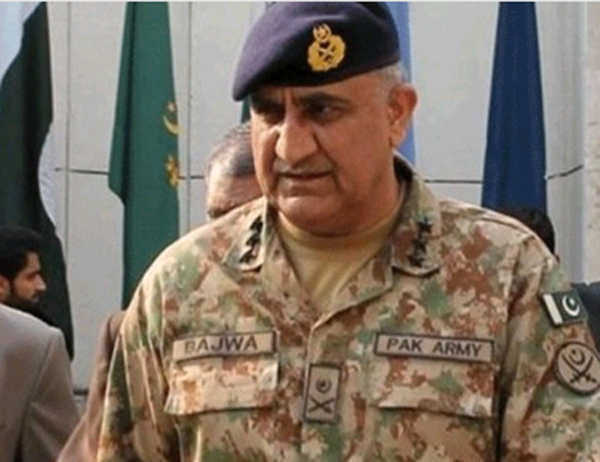 Within 48 hours of Pakistan Army Chief General Qamar Javed Bajwa having assured Army’s ‘full support’ to the ‘Kashmir cause’, he has been given a three-year extension in service by Pakistan Prime Minister Imran Khan.

Army Chief’s in Pakistan often ‘get’ such extensions. It is rather a desire of the Chief to continue and the elected government ‘allows’ the extension.

The orders to extend the services of the General were signed by Khan himself and a notification said: "General Qamar Javed Bajwa is appointed Chief of Army Staff for another term of three years from the date of completion of current tenure.”

Arguing out the logic for such a move, the orders to extend the tenure said the decision has been taken in view of “the regional security environment."

Gen Bajwa was appointed as the Army chief in November 2016, by the Prime Minister of Pakistan Nawaz Sharif.

The move comes just two days after the Director General of Inter-Services Public Relations (ISPR) of Pakistan Maj Gen Asif Ghafoor, tweeted that General Bajwa assured Pakistan Army’s full support and ‘commitment to the Kashmir cause and its people’.

General Bajwa gave the assurance during a meeting with ‘Azad Jammu and Kashmir (AJK)’ President Sardar Masood Khan, who called on him in Rawalpindi on August 17, the DG ISPR said. Pakistan calls its illegally occupied portion of J&K as ‘AJK’; India refers to it as Pakistan Occupied Kashmir (PoK).

In June, Lieutenant General Faiz Hameed was appointed as the new Director-General of the powerful spy agency, Inter-Services Intelligence (ISI).

Hameed replaced its Lieutenant General Asim Munir, just eight months after the latter was appointed to the post following the retirement of his predecessor Lt Gen Naveed Mukhtar. Lt Gen Hameed has previously served as the head of the Counter Intelligence wing.