CHANDIGARH: Punjab government’s functioning virtually came to a standstill on Wednesday as state civil service officers went on a pen-down strike, in protest against the increase in incidents of violence against them. 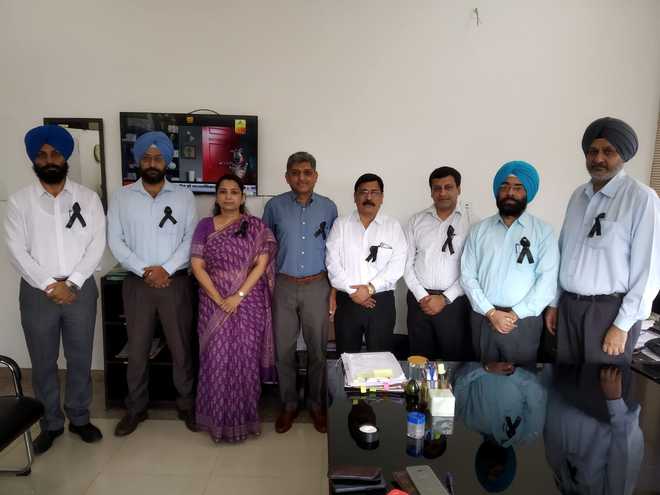 Ruchika M. Khanna
Tribune News Service
Chandigarh, September 11
Punjab government’s functioning virtually came to a standstill on Wednesday as state civil service officers went on a pen-down strike, in protest against the increase in incidents of violence against them.
Over 275 PCS officers observed the pen-down strike and sported black badges in protest against atleast ten incidents of violence and illegal confinement of officers by protesting organisations, in the past two months alone.
The immediate trigger for the protest was the gherao of Zira SDM by a farmers’ organisation when he was overseeing flood relief operations in the town last week. The protestors had threatened to throw away his car in the river.
As a result of the strike, work in all tehsil offices of Punjab remained suspended. Deeds were not registered, nor were any affidavits signed on Wednesday. No SDM courts were held across the state, according to information gathered from all districts in the state.
The PCS Officers Association said that though they had taken up the matter with the Chief Secretary and Chief Principal Secretary, no effort to redress their grievances was made forcing them to take this extreme step.
“This is a one-day protest, but if no action is taken, we will be forced to take on a more stringent protest,” said the Association.
SHARE ARTICLE