SHIMLA:Apple farmers have expressed their resentment over regular power cuts and low voltage in several villages located in the apple belt, which have been disrupting grading and packaging of the fruit for the last one month. 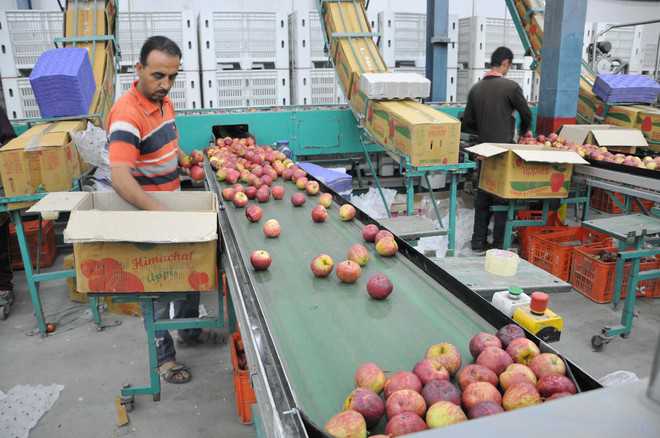 Apple farmers have expressed their resentment over regular power cuts and low voltage in several villages located in the apple belt, which have been disrupting grading and packaging of the fruit for the last one month.

“We face power cuts for hours daily that has halted the operation of apple packaging and grading machines”, said Laxman Thakur, a farmer from Jubbal valley.

“Imagine, there are five linemen for operating 42 transformers in one section in Annu and whenever we complain to them they say there is technical staff crunch and are helpless”, he added. The growers demand that the HPSEBL should recruit enough technical staff to maintain power supply, considering that the apple season is at its peak.

The most affected areas are Jubbal-Hatkoti, Thana Surachali in Jubbal valley, Deot, Shantha, Bamta in Chopal subdivision, and remote areas of Rampur and Rohru subdivisions. The farmers have set up grading and packaging machines to grade and pack apple, but these machines remain non-operational due to shortage of power, they said.

“We cannot operate the grading machines due to frequent power cuts. The fruit rot due to the delay and in turn does not fetch right prices in the markets”, rued Govind Singh, a farmer from Thana village. “We have lodged hundreds of complaints with the local HPSEBL offices, but they say that they do not have technical staff”, he added.

Even if the power supply is restored, there is low voltage that makes it difficult to run the machines, the farmers rued.

The farmers in Chopal subdivision also face the same problem. The apple season is at its peak, the harvested fruit sometime rot days together in the orchards, said the farmers.

The HPSEBL field staff said it became difficult for them to monitor and restore the transmission lines and repair snags in transformers as these were located at different locations. “There is just one line man who can scale the electric pole in Chopal section and we need more technical staff for the purpose, they added.