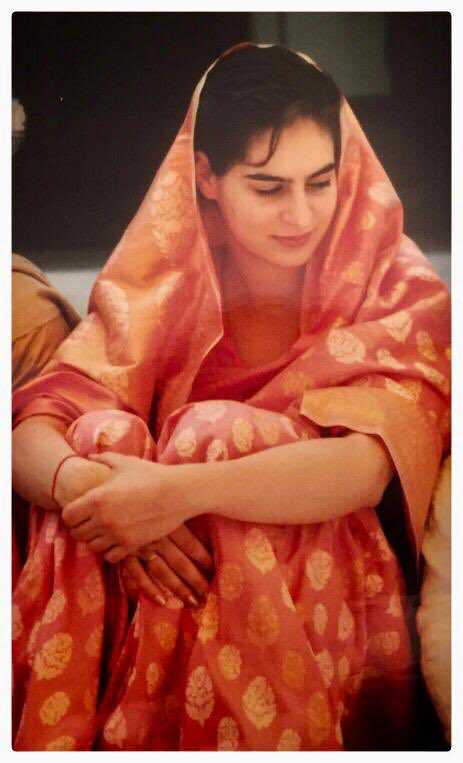 However, the Gandhi family scion has had to add a clarification too when the twitterati started congratulating her on what they thought was her wedding anniversary.

“Thanks for all the anniversary wishes... but it’s just a throwback photo for the #SareeTwitter guys... my anniv is in Feb,” she clarified.

In a tongue-in-cheek remark, she also tagged her husband Robert Vadra and added, "You can still take me out for dinner".

Thanks for all the anniversary wishes...but it’s just a throwback photo for the #SareeTwitter guys, my anniv is in Feb!

Earlier today, she posted a throwback picture of her in a saree on Twitter.

Morning puja on the day of my wedding (22 years ago!) #SareeTwitter pic.twitter.com/EdwzGAP3Wt

The #SareeTwitter trend began on Monday with many sharing their favourite pictures in saree using the hashtag, and by Tuesday it became a rage.

The microblogging site was flooded with posts from people from all walks of life, including celebrities and politicians, sharing their favourite pictures in a saree using the hashtag.

However, the reason begin the idea #SareeTwitter is yet to be figured out.

Saree dipicts our Indian tradition and culture. It is also supposed to be known as our sexiest costume. One looks dignified , elegant, beautiful , graceful and yet can seem very appealing in it #SareeTwitter pic.twitter.com/gVIuAZ6Uco

Because #SareeTwitter & I cannot miss tweeting with this hashtag :) pic.twitter.com/VTC2ISlvoy