JAMMU: The traffic on the Tawi bridge was blocked for nearly two hours on Tuesday as followers of Guru Ravidas took out a protest march. 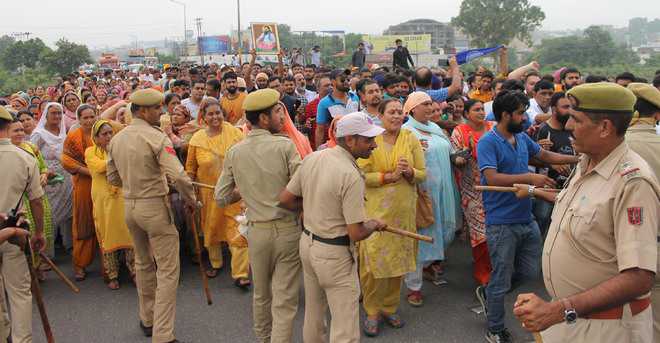 The traffic on the Tawi bridge was blocked for nearly two hours on Tuesday as followers of Guru Ravidas took out a protest march.

Amid reports that a temple dedicated to Guru Ravidas at Tughlakabad in New Delhi was demolished on the directions of the Supreme Court, a large number of followers of Guru Ravidas gathered at the Bikram Chowk.

They started a protest march around 11.45 am from Press Club, Jammu. When they reached the Bikram Chowk, the traffic movement was held up. The blockade resulted in long queues of vehicles on both sides of the highway, causing inconvenience to commuters in hot and humid weather.

The protesters demanded that the Centre as well as Delhi Government should act swiftly and announce reconstruction of the temple at the earliest.

Later, senior police officers intervened to defuse the tension and restore traffic. They assured protesters that their demands would be put forward to the higher authorities.