HOSHIARPUR: A large numbers of fish were reported dead in the Surry and Beas near the bordering village of Kiri Afghana on the Hoshiarpur-Gurdaspur border. 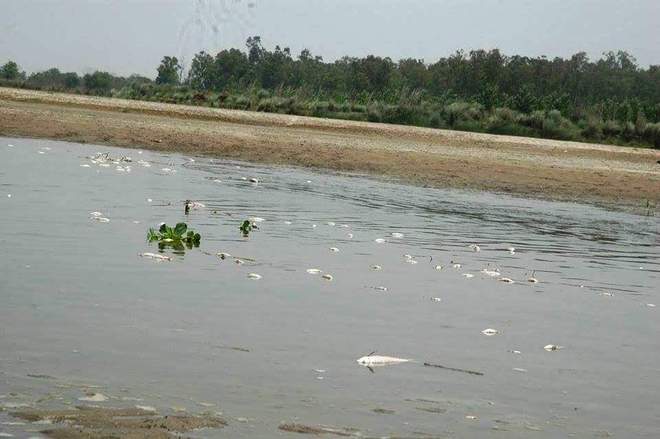 The dead fish lying on the banks of the Surry river. Tribune photo

A large numbers of fish were reported dead in the Surry and Beas near the bordering village of Kiri Afghana on the Hoshiarpur-Gurdaspur border. Dead fish could be seen floating over water in large numbers.

Officials of the Fisheries Department investigating the matter claimed that the discharge of untreated toxic effluents from a nearby sugar mill-cum-distillery had caused their death.

A team from the Fisheries Department has taken account of the situation. Assistant Director Fisheries (ADF) said their primary investigation confirmed that the cause of the death of such a large number of fish had been the toxic effluents from a distillery. The matter has been reported to the Punjab Pollution Control Board (PPCB) and the police by the ADF.

The matter was brought to the notice of senior fisheries officer Jaswant Singh of Gurdaspur by former wildlife warden Sukhdeep Singh Bajwa. Bajwa told The Tribune that there were a large number of dead fish floating over the water of the Surry (a tributary of Beas) and the Beas.

ADF Vishesh Kumar said an investigation team was sent on the spot. He confirmed that there had been a large number of dead fish in the water and on the banks. He said, “Primarily, it looks that the fish have died due to toxic effluents in the water. The stream has continuous flow of water, so there may not be any other reason for it. Our investigation finds that there was discharge of untreated effluents in the water stream from the nearby distillery and a sugar mill and it caused the death of a large number of fish”.

Asked about the action taken on it, he said, “We have reported the matter to the police and the PPCB officials. They have been asked to check for violations in discharge of effluents and the quantity of such discharge.”

Based upon the information from the Fisheries Department, the PPCB sprung into action and a team comprising SDOs Jaswinder Singh and Amritpal Singh reached the spot in the evening to investigate the matter.

SDO Jaswinder Singh said they had been investigating the incident, but it primarily seems to be a case of violation of PPCB norms.

“It appears that untreated water containing toxic waste was released into the tributary that caused the death of the fish and further investigations are on,” he said.

He said GS Majithia, Chief Engineer of the PPCB, was also reaching the spot and detailed investigation would be done in his presence.