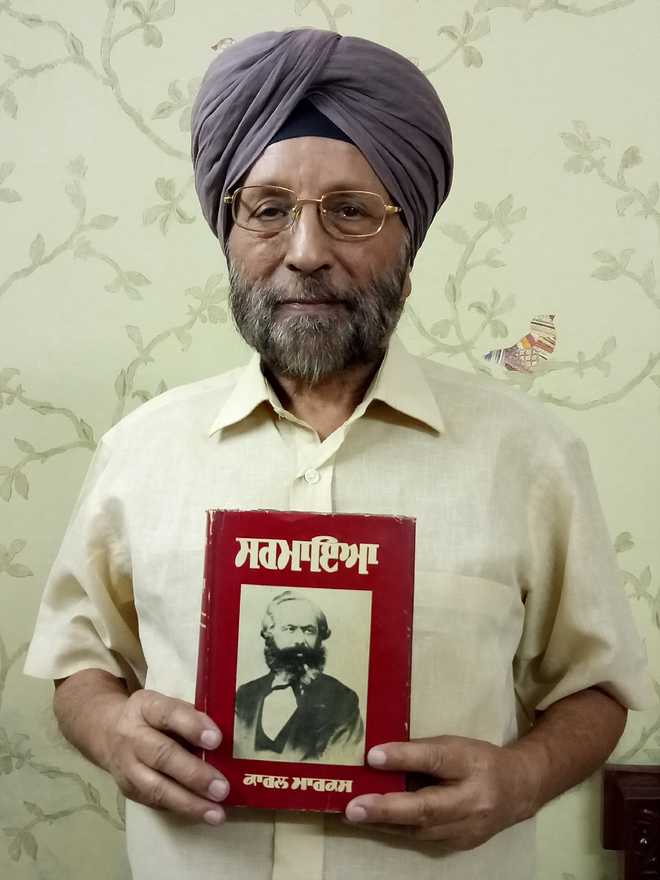 Karl Marx’s writings first reached Punjabi readers in the 1920s. However, it was to take another 50 years for his magnum opus, Das Kapital (Capital in English), to reach them. The thinker’s seminal work was translated by four writers and published by Bhapa Pritam Singh of the famous Navyug Publishers in Delhi in 1975. Not everyone is happy with the translation though.

Over 40 years after translating Capital along with three others, writer Gurbachan Bhullar is sad to see the variation in economic terminology and style in the work done jointly by them. “None of us was ready to listen to each other. Unfortunately, there was nobody to coordinate among four of us,” he says.

Work on the first volume of the book started in the early 1970s when Bhapa Pritam Singh commissioned the translation job to writers Piara Singh Sehrai, Karanjeet Singh, Gurbachan Bhullar and Prof Prem Singh with help from the Soviet Embassy. The 1887 English edition of the work edited by Marx’s comrade Friedrich Engels was translated into Punjabi.

After translating more than 100 pages of the first volume, Bhullar told Bhapa Pritam, “I can’t work like that. Give me a volume independently.” He was then given the third volume, the biggest among the three, to translate. The work was titled ‘Sarmaya’ in Punjabi and the first volume was released in 1975. “However, today too, we are not sure whether it was correct to call it ‘Sarmaya’ or should it be ‘Poonji’,” says Delhi-based Bhullar, who has served as the Editor of the Punjabi Tribune.

Though the very idea of translating Marx’s work was exciting, he later realised it was not that easy. “The biggest problem was the economic terminology as standardised words in Punjabi didn’t exist.”

While it took long for the translated version of Capital to reach Punjabi readers, other works of Marx had started being translated into Punjabi by the 1920s. Ghadar Party leader Bhai Santokh Singh was the first to introduce Marx through his magazine ‘Kirti’ launched in 1926. “He published many articles in chaste Punjabi drawing on Marx’s writings and grappled with coining the new Marxian terminology,” tells London-based Punjabi writer Amarjit Chandan.

However, Marx’s influence can be traced to the 1920s writings of freedom fighters and scholars. In his 1930 essay, ‘Why I am an Atheist’, Bhagat Singh mentions of reading “a few books of Marx”. During the phase, another Ghadar leader Lala Har Dayal had written Marx’s biography ‘Karl Marx: A Modern Rishi’.

Later, in the 1930s and 1940s, the Communist Party of India gained footing in Punjab and to equip their cadre with theory, started translating Marx’s writings into Punjabi.

“Seven communists in Lahore worked on translating Marx into Punjabi in the early 1940s. They were Makhan Singh of Gharjakh, Bhag Singh who had a PhD in political science from the University of California, Berkeley, Teja Singh Sutantar, Sohan Singh Josh, Arjan Singh Gargaj, Randhir Singh and Jagjit Singh Anand. “They all were on the editorial board of ‘Jang-e-Azadi’, a communist weekly,” tells Chandan.

Randhir Singh, who later became a famous political scientist and translated The Communist Manifesto into Punjabi in 1945, was another scholar who translated several works of Marx into Punjabi for communist magazine, ‘Sada Yug’, says Dr Kuldeep Singh of Punjabi University, Patiala.

Finding readers, albeit quality an issue