CHANDIGARH: In a stinging response to Union Minister Harsimrat Kaur Badal’s latest tirade against his government, Chief Minister Captain Amarinder Singh on Sunday reminded the Akali leader that it was her SAD regime that had heaped humiliation on Akal Takht Jathedar in sharp contrast to his government, which had always treated the Sikh temporal seat with respect. 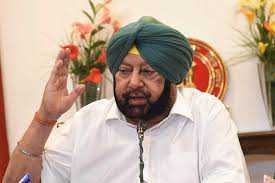 In a stinging response to Union Minister Harsimrat Kaur Badal’s latest tirade against his government, Chief Minister Captain Amarinder Singh on Sunday reminded the Akali leader that it was her SAD regime that had heaped humiliation on Akal Takht Jathedar in sharp contrast to his government, which had always treated the Sikh temporal seat with respect.

“For 10 years, the Akalis, including Harsimrat Kaur, had been totally drunk on power, sparing neither Akal Takht nor the people of Punjab from their tyrannical control,” said Capt Amarinder, asking the Union Minister to stop indulging in such blatant “falsehoods for petty political gains”.

“Everyone knows how you (Akalis) maliciously ill-treated Akal Takht Jathedars out of sheer arrogance and continue to abuse the SGPC by dictating terms to them,” Capt Amarinder said, reacting to Harsimrat’s allegations on his government over the issue of joint celebrations of 550th Parkash Purb.

“She has no scruples, none of the Akalis have,” said the Chief Minister, pointing out that while Harsimrat was singing praises for Prime Minister Narendra Modi and his government, her husband Sukhbir Singh Badal, was going around appealing for forfeiture of the BJP candidates’ deposits in the campaign for the Haryana elections.

Their obnoxious double standards had long been exposed to the people of Punjab, who had rejected the Akali leadership time and again, since their absolute rout in the 2017 Assembly polls in the state, the Chief Minister said.

Pointing out that he had, for months, been personally engaging with the SGPC and appealing for a joint celebration for the 550th Gurpurb, as befitting of the occasion, Capt Amarinder said it was the SAD which had been persistently scuttling his efforts in their game of one-upmanship. While the Akalis had always exploited religion for political gains, he (Capt Amarinder) had expected them to show some decency in the case of the historic 550th Prakash Purb celebrations, said the Chief Minister, adding, “The Akalis evidently had no shame when it came to the promotion of their personal interests.”

The manner in which they had been going to invite the Prime Minister and other Union Government leaders for the separate event of the SGPC clearly exposed their true intent, he added.

Bathinda: Finance Minister Manpreet Badal on Sunday blamed the SAD for no joint Gurpurb celebration. “Everyone knows who calls the shots in the SGPC. It is an open secret that the SAD does,” he said.  “How can we follow Guru Nanak’s teachings, if we can’t celebrate such a historic occasion together?” he asked. He termed it as ‘misfortune’ of Punjab. tns