CHANDIGARH: Punjab Police have arrested the second and main perpetrator of the Nirankari Bhavan grenade attack, to crack the case less than a week after a religious congregation was targeted in Amritsar last Sunday leaving three persons dead. 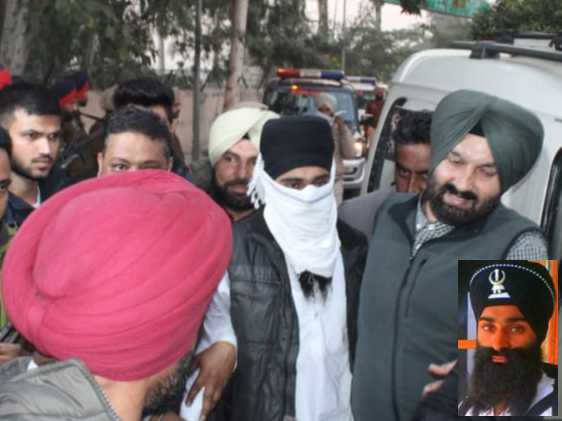 Avtar Singh (inset) arrested in the Amritsar grenade blast case being produced in a court at Ajnala on Saturday. Photo: Vishal Kumar

Punjab Police have arrested the second and main perpetrator of the Nirankari Bhavan grenade attack, to crack the case less than a week after a religious congregation was targeted in Amritsar last Sunday leaving three persons dead.

Avtar Singh would be produced in the court and the police would seek his remand, DGP Suresh Arora told the media on Saturday, adding that there was strong evidence against the suspects caught in the case.

Avtar's links have also been traced to Harmeet Singh Happy alias PhD, the self-styled chief of ISI-backed KLF, based in Pakistan. Happy alias PhD has emerged as the most active leader of Punjab-based outfits working under the watch and directions of the Pakistan's ISI, said the DGP.

He expressed concern over the movement of terrorists from J&K to Punjab but asserted that the police were keep close tabs on all such movements.

Giving details of the operation, Arora, who was accompanied by DGP (Intelligence) Dinkar Gupta, and DGP (Law & Order) H S Dhillon said the leads provided by Bikramjit Singh alias Bikram led the police to arrest 32-year-old Avtar Singh from Khiala village in Lopoke, from the tubewell motor shed of his uncle, Trilok Singh, early this morning.

Avtar, a resident of Chak Mishri Khan, is a graduate and has been donning 'Nihang Bana' since 2012. He was a practising quack in his village and had no criminal history, said the DGP.

Both the pistols which the perpetrators were carrying on the day of attack have been recovered on the disclosures of Avtar Khalsa. The weapons recovered include two pistols (.32 bore) - one of them US made, four magazines and 25 live rounds, said the DGP, adding that the recovery followed the arrest of one Shabnamdeep from Patiala.

Initial investigations have revealed that Avtar was contacted on WhatsApp, a few months ago, by one Javed, who claimed to be a Pakistani national (PIO) from Dubai. The so-called Pakistani national, who spoke in Punjabi, first contacted him, on the basis of a reference, in the garb of seeking consultation for his back problem. Thereafter, he started to discuss Sikh issues with him and motivating him to target the enemies of the 'Sikh quom'.

A few months ago, he put Avtar in touch with one Happy who claimed to be based in Pakistan. According to Avtar, Happy would try to motivate him to carry out terrorist acts in Punjab, on the lines of targeted killings of RSS and Dera Sacha Sauda workers in Punjab in 2016-17.

According to preliminary investigations, Avtar Singh disclosed that his maternal cousin, Paramjit Singh is based in Italy. Paramjit's elder brother, Sarabjit Singh, a constable in Punjab Police, had joined terrorist ranks, KLF (Budhisingwala). Sarabjit Singh had died in an encounter with the police near Rayya (Beas) in 1992.

Avtar Singh has disclosed that about two months ago, he contacted Paramjit to arrange weapons to settle his enmity with some people of his village, which Paramjit assured to arrange soon. At this point, Paramjit Baba put him in touch with Happy, based in Pakistan, who Avtar had identified as the same person introduced to him by the Dubai-based Pak National, Javed. Happy promised Avtar to arrange weapons for him.

Towards the end of October or beginning of November, Avtar got a WhatsApp message from a foreign number with details of a location where weapons had been buried. On November 3 at around 11 pm, Avtar contacted his close friend, Bikramjit Singh and asked him to be ready at the next morning.

According to Avtar Singh, he and Bikramjit went to the given location near Majitha on November 4 and successfully retrieved a polythene bag containing two .32 bore pistols, four magazines, twenty-five cartridges and one hand grenade.

After retrieval, Avtar concealed the arms/explosive in his medical store. On November 13, Avtar and Bikram carried out a recce of the Nirankari Bhavan at Rajasansi and both decided to target the Bhavan on an opportune day. On November 16, the two met at Dhariwal village, planned the attack in detail, and decided to carry out the attack on November 18. Avtar has corroborated the sequence of events of the attack, as disclosed by Bikramjit.

After the grenade attack, Avtar received a WhatsApp message from a Pakistan number enquiring about his well-being and asking him to call back immediately. Avtar claimed that he had deleted the message as well as the number after the Sunday attack.

During initial investigations, the accused has also said he initially got radicalised in the wake of the 2007 incident when the DSS chief appeared in public in the attire of Guru Gobind Singh Ji. Thereafter, he began to participate regularly in protests against the dera in his local area. He was an active member of Sri Guru Granth Sahib Satkar Committee and regularly participated in the protests organised by the committee.

Avtar Singh has further added that he was staunchly opposed to 'Derawad' and all the self-styled Gurus, such as DSS, DJJS, Piara Singh Bhaniarewala and controversial Sikh preachers, including Sarabjit Singh Dhunda, Inderjit Singh Ghagga etc, and was also against the Hindu right wing and its leaders/workers.

The suspect’s family countered the police saying he was being framed in the case.

Avtar Singh’s father Gurdail Singh claimed his son was home when the attack occurred, supervising some ongoing repairs at home. He also claimed that Trilok Singh, from whose tubewell police claim Avatar Singh was arrested, was a family friend and would have informed them of their son’s arrest.

“We believe that he was arrested earlier,” he said.

The suspect’s family claimed they feared he would be arrested because of their own panthic links, and had warned him to stay away. Father Gurdial Singh admitted that they had been part of a protest against a Nirankari Bhavan at Chogawan four months, but quickly added: “It was like many others who attended the protest”.

“We have been attending protests at Bargari but the links with Pakistan based Javed and with 20-20 Sikh referendum organisers are not true,” he said, adding that his family was being harassed.

Trilok Singh, head of a local Nihang organisation, could not be reached for his version. Some of his associates said he was away at Sultanpur Lodhi for a religious event.