RAIKOT: A commission agent who was a former sarpanch of Hissowal village in Ludhiana district was charred to death after the Swift car he was travelling in caught fire on the Raikot-Mullanpur road near Raqba village on Saturday morning. 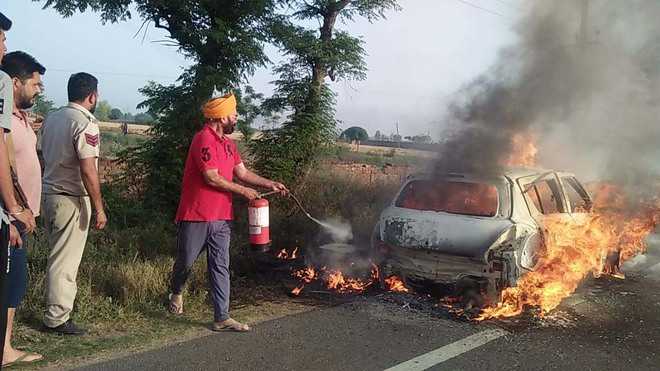 Passersby try to extinguish fire on the Raikot-Mullanpur road on Saturday. Tribune photo

A commission agent who was a former sarpanch of Hissowal village in Ludhiana district was charred to death after the Swift car he was travelling in caught fire on the Raikot-Mullanpur road near Raqba village on Saturday morning.

Harnek Singh (65) was going to the grain market to oversee procurement at his shops when the incident took place. Though the exact cause of fire is yet to be ascertained, it is suspected that sparking in electric circuits triggered the fire which did not allow the occupant to even open the window.

Investigations revealed that the car had caught fire when it was at a reasonable speed. Sensing danger, Harnek had stopped the car on a roadside, but could not come out as the locks did not open. He first tried to open the window of his side and then the opposite side when he collapsed.

The windy weather spread the fire which engulfed the vehicle, leaving no chance for rescue, said sources. The deceased had returned from Canada two days ago. His son Harpreet Singh is currently the sarpanch of the village.