BATHINDA: Ahead of the upcoming Lok Sabha elections, a coordination meeting of senior police officials of Punjab, Haryana and Rajasthan was held at the District Administrative Complex here today. 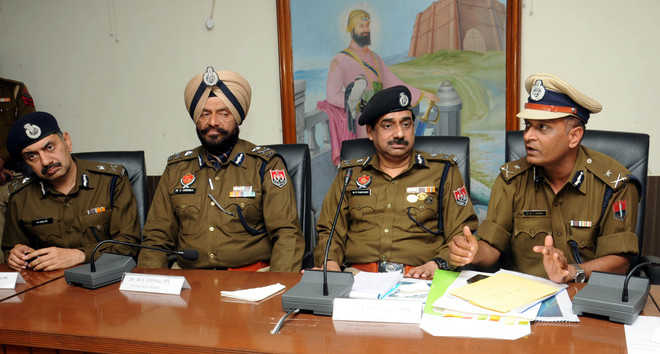 Senior police officials of Punjab, Haryana and Rajasthan interact with mediapersons after a meeting in Bathinda on Wednesday. Tribune photo: Pawan Sharma

Ahead of the upcoming Lok Sabha elections, a coordination meeting of senior police officials of Punjab, Haryana and Rajasthan was held at the District Administrative Complex here today.

During the meeting, officials discussed measures to curb smuggling of liquor and drugs besides other illegal activities during the elections. They also decided to share vital inputs regarding criminals and gangsters with each other.

To curb crime, they have decided to set up round-the-clock joint check posts in the border areas. A discussion was also held on sealing the interstate borders during the elections.

It was decided to set up 58 joint check posts in the Bathinda Range and 38 in the Ferozepur Range. The officials stated that this would help them cover all interstate link roads and the main highways passing through these areas.

The officials decided that the SHOs of police stations in the areas along the interstate borders would meet once every month and work in coordination.

While talking to mediapersons, IGP Bathinda Range MF Farooqui said, “We held an interstate coordination meeting in which police officials from Punjab, Haryana and Rajasthan participated. We have devised a strategy to nab criminals and drug peddlers by sharing vital information with each other.”

Replying to a query on liquor being smuggled from Haryana on a large scale, IGP Farooqui said, “We cannot completely stop liquor and drug smuggling, but we can reduce it. Earlier too, the police worked on this and arrested a large number of smugglers. We want to tighten the noose on smugglers by sharing information.” He added that they would also nab criminals and POs hiding in the neighbouring states.

Replying to another query, IGP Bikaner Range BL Meena said, “Whenever Punjab tightened the noose on drug peddlers, drugs were smuggled from Pakistan to Rajasthan via the Hindu Kush region.”