Cost of freedom must not be forgotten, says Rahul

AMRITSAR: Congress president Rahul Gandhi, flanked by Chief Minister Capt Amarinder Singh and other state party leaders, paid floral tributes at the Jallianwala Bagh memorial to mark the centenary of the massacre, which was observed today. 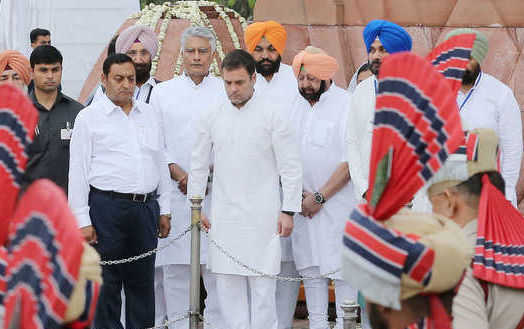 Congress president Rahul Gandhi, flanked by Chief Minister Capt Amarinder Singh and other state party leaders, paid floral tributes at the Jallianwala Bagh memorial to mark the centenary of the massacre, which was observed today.

He laid a wreath at the historic National Memorial here as a mark of respect for those who sacrificed their lives in service of the nation exactly hundred years ago, on March 13, 1919, in one of the worst bloodbaths in India’s pre-Independence history.

Joining thousands of people from all walks of life who had gathered at the historic monument to pay their respects to the martyrs, Rahul and Capt Amarinder stood in silence as they offered prayers and remembered the sacrifices of those who led the nation to its independence.

A contingent of the Punjab Police paid tributes to the martyrs by reversing arms.

“The cost of freedom must never ever be forgotten. We salute the people of India who gave everything they had for it. Jai Hind,” the Congress president later wrote in the visitors’ book at the memorial.

It was a sombre and emotional moment for people, many of whom could be seen wiping tears as they saluted the courage of those immortal bravehearts, with the national anthem playing in the background.

British High Commissioner to India Dominic Asquith paid tributes at the Jallianwala Bagh National Memorial. Addressing mediapersons at Jallianwala Bagh, he expressed his regret at the massacre. He said, “My country has deep affection for India. I would like to rewrite history, but you cannot. What can you do is to work for bright future?” He said British Prime Minister Theresa May explained the massacre as deeply shameful scar in the history and former Prime Minister David Cameron had already described it as a shameful event.