ROPAR/CHANDIGARH: Ending speculation over his desertion of the Aam Aadmi Party, Ropar MLA Amarjit Singh Sandoa finally joined the Congress in Chandigarh on Saturday. Sandoa was welcomed to the party by Punjab Chief Minister Captain Amarinder Singh at the latter’s residence in Chandigarh. 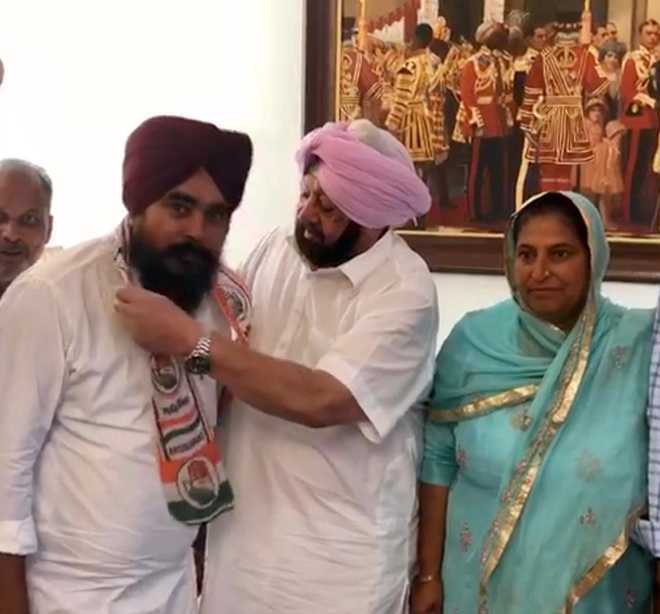 Ending speculation over his desertion of the Aam Aadmi Party, Ropar MLA Amarjit Singh Sandoa finally joined the Congress in Chandigarh on Saturday. Sandoa was welcomed to the party by Punjab Chief Minister Captain Amarinder Singh at the latter’s residence in Chandigarh.

Though CM Amarinder Singh has denied “poaching” AAP MLAs, this is the second legislator who had joined the Congress in the last 10 days. AAP MLA from Mansa Nazar Singh Mashahia had left the party for the Congress on April 25.

Welcoming Sandoa into the party fold, Captain Amarinder said the Congress had got a major boost as a result of the wave of exodus from members of various opposition parties in the state.

Sandoa who was a taxi driver in Delhi was fielded by AAP from his native place Ropar. After defeating SAD stalwart Daljit Singh Cheema and Congress candidate Brinder Singh Dhillon, he entered the state assembly after 2017 elections.

Sandoa, however, courted controversies when a woman in Ropar levelled allegations of molestation against him and later some locals roughed him up when he went to stop illegal mining near Nurpur Bedi in June last year.

Later, the alleged attacker had charged the MLA with pressuring them to give money in lieu of continuing the mining in area.

Though it was already in the air that the Congress was in talks with Sandoa to get him in party fold, he kept denying it and even continued to attend AAP’s meetings at Chandigarh as well as in Delhi regarding the Lok Sabha election strategy.

Today, he left for Chandigarh in the morning along with Anandpur Sahib MLA and Punjab Speaker Rana KP Singh and with few of his confidants making it clear for the locals that he was set to join the Punjab’s ruling party.

Sandoa’s joining would further bolster the Congress prospects in Ropar, where Manish Tewari was already making waves as the party’s candidate, Capt Amarinder said. Exhorting Sandoya to put in his best for the parliamentary elections in the state, Amarinder asked him to help Tewari at the grassroots level in the constituency.

Sandoa, who joined along with his supporters, expressed his gratitude towards the Chief Minister and assured him that of his best efforts. He said he was feeling disenchanted in the AAP due to the top leadership’s high-handed approach towards Punjab and had decided to join Congress as he felt aligned with the democratic and inclusive philosophy of the party.