ISLAMABAD: A life-size sculpture of Maharaja Ranjit Singh, who ruled over Punjab for close to 40 years in the early 19th century, was unveiled on Thursday at the historic Lahore Fort in Pakistan to mark his 180th death anniversary. 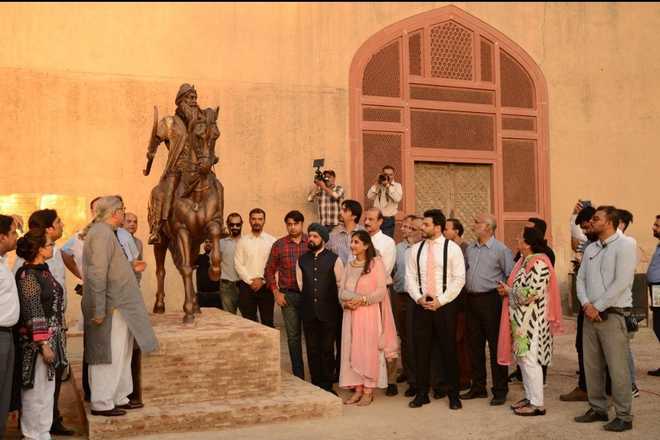 A life-size sculpture of Maharaja Ranjit Singh, who ruled over Punjab for close to 40 years in the early 19th century, was unveiled on Thursday at the historic Lahore Fort in Pakistan to mark his 180th death anniversary.

It took eight months to complete the eight feet tall statue of the Sikh ruler sitting on his favourite horse named Kahar Bahar.

The horse was a gift from Dost Muhammad Khan, the founder of the Barazkai dynasty.

The sculpture was installed at the Sikh Gallery of the Mai Jindan Haveli in the Lahore Fort during a special ceremony attended by senior Pakistani officials.

The haveli, named after Ranjit Singh’s youngest queen, houses a permanent exhibition of Sikh artefacts in the Sikh Gallery.

The statue was built and installed by the Walled City of Lahore Authority (WCLA) in collaboration with the UK-based Sikh Heritage Foundation, which funded the project.

“The statue weighs around 250-330 kilograms. The sculpture is made up of 85 per cent bronze, 5 per cent tin, 5 per cent lead and 5 per cent zinc,” Sikh Heritage Foundation president Bobby Singh Bansal said.

WCLA Conservation and Planning Director Najam-Us-Saqib said the statue will be a “good tourist attraction” and iron grills would be erected around the sculpture to protect it.

The statue was made by artists from Lahore’s National College of Art and Naqsh School of Art under the supervision of Faqir Khana Museum Director Faqir Saifuddin.

“This sculpture is a tribute and homage to the son of the soil,” he said, adding that Lahore has had rich cultural and religious diversity for centuries and Ranjit Singh was one important part of it.

Around 465 Indian Sikh pilgrims are expected to visit Lahore at Gurudwara Dera Sahib that houses the funerary urns of Ranjit Singh to commemorate the 180th death anniversary of the Sikh ruler on June 29.

Fakir Khana Museum has also launched 180 limited edition bust sculptures of the Maharaja for art connoisseurs and those interested in the history of Punjab. — PTI