No clean chit to Badals in sacrilege case, their accountability no less: Amarinder

CHANDIGARH: Punjab Chief Minister Captain Amarinder Singh on Tuesday made it clear that he had not given a clean chit to Badals over their alleged involvement in the sacrilege case 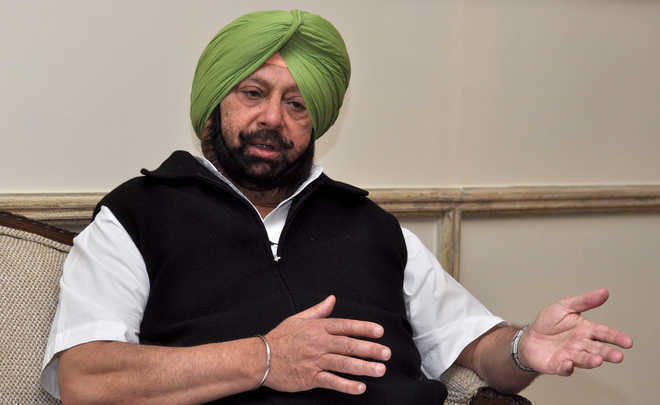 Tribune News Service
Chandigarh, September 24
Punjab Chief Minister Captain Amarinder Singh on Tuesday made it clear that he had not given a clean chit to Badals over their alleged involvement in the sacrilege case, which he said “more than manifested in their hobnobbings with Dera Sacha Sauda ahead of Bargari and their recent desperate attempts to scuttle the probe by influencing the closure report of the CBI.”
The Chief Minister was reacting to the “misleading” headline twist given to his interview to a newspaper.
“At no point did I say Prakash Singh Badal or his son Sukhbir was not involved in the sacrilege. As is evident from the reported interview itself, all I have said was that Badal did not himself go and tear up the Guru Granth Sahib. But that does not rule out his involvement in the matter,” he clarified.
They (the Badals) were as responsible as the men who had indulged in the actual act of desecration that had cascaded into such a grave chain of events for the state and its people, said the Chief Minister. They not only failed to prevent the large number of cases of sacrilege that happened under their watch but also allowed the culprits to go scot free, he added.
Expressing concern over the attempt to “misrepresent” and give a completely “erroneous” twist to his statements, which were a matter of record, the Chief Minister said the Badals, being in power at the time, were totally responsible for the events that led to the sacrilege and the subsequent police firing, as he had maintained all along. They could not shrug off their culpability on this count, which was as grave a crime as actually tearing off the pages of the Holy book, he added.
“As Chief Minister, am I not responsible for the law and order situation in the state today? If there is a spurt of crimes, wouldn’t the people and the media blame me?,” the Chief Minister asked.
The Badals’ decision to back the Dera for support in the run-up to the elections was a political move, but it triggered criminal actions for which, while they may not be directly responsible, their accountability could not be ignored, Captain Amarinder said.
“The criminality of actions in the sacrilege case is one thing, for which the Badals were probably not guilty, but what about the rest? What about the Dera links which created the circumstances for the desecration? What about the subsequent police firing, that killed people and maimed/injured others?” the Chief Minister asked, pointing out that he had clearly stated these facts in the interview which, the media house in question chose to “sensationalise” through an incorrect heading.
SHARE ARTICLE