Here''s why 50% of procured wheat lying in open in Punjab : The Tribune India

Here''s why 50% of procured wheat lying in open in Punjab

Chandigarh: Due to bumper wheat produce this season, almost 50 per cent of the wheat procured this year will be stored in the open in mandis. 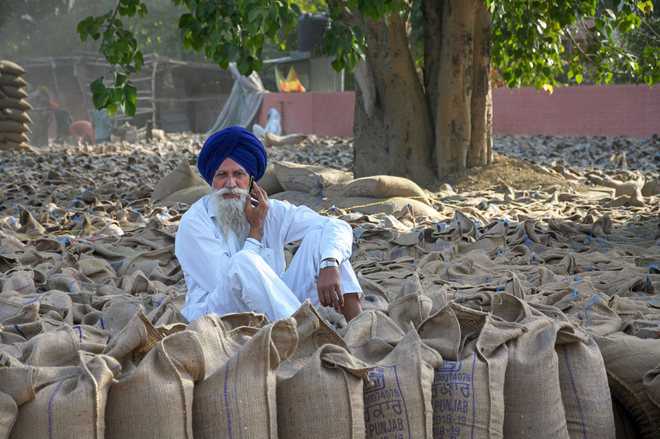 A farmer awaits procurement of his produce at the Bhagtanwala grain market in Amritsar on Thursday. Slow lifting has caused a glut of wheat in mandis. PTI

Due to bumper produce this season, Punjab’s major concern is storing the procured wheat. Almost 50 per cent of the wheat procured this year will be stored in the open in mandis. The covered storage space has all been used by the paddy from the last kharif season. The wheat is still arriving in mandis.

This wheat will be subjected to vagaries of weather in case it is not lifted immediately, and could go waste.

The matter was raised by a Punjab government delegation, led by Chief Secretary Karan Avtar Singh, during a meeting with Secretary, Food, GoI, Ravi Kant here on Thursday. Raising the issue of anything between 55-60 lakh metric tonnes (LMT) of wheat that would have to be stored in the open, the state pressed upon the Centre to run more trains next month (Centre has already assured of running 400 special trains for transporting wheat from Punjab to recipient states), so that this wheat stored in the open is first lifted.

Punjab is expecting production of 180 LMT wheat this year, of which 118 LMT will be procured by the government agencies. Till date, 102 LMT of wheat has been procured by the agencies and the FCI. Of this, 70 per cent of wheat that has arrived in mandis in the past 72 hours has been lifted.

Punjab government officials are learnt to have told the Central delegation that the glut in the mandis happened only in the past week when the wheat arrival peaked. But they were following the norm of lifting wheat within 72 hours of its arrival. “The main problem this year will be the storage of the grain being produced,” the state is learnt to have told the Secretary, Food.

Officials say that Ravi Kant has told the state government that a consultant for the storage gap analysis and need for creating more silo storages in Punjab is being appointed, and the report would come out soon.

Sources say that the Central government delegation said after lifting the wheat stored in the open in mandis, they would ensure maximum movement of wheat stored on raised plinths and then move the remaining wheat stocks to other states. This movement would allow the state to have

sufficient storage space for the paddy procurement season that begins in six months from now.