BATHINDA: A pink robe worn by Dera Sacha Sauda chief Gurmeet Ram Rahim Singh during a congregation at Salabatpura here on May 13, 2007, when he kicked up a row by allegedly imitating Guru Gobind Singh, has been lying dumped in the “malkhana” of Kotwali police station for the past decade. 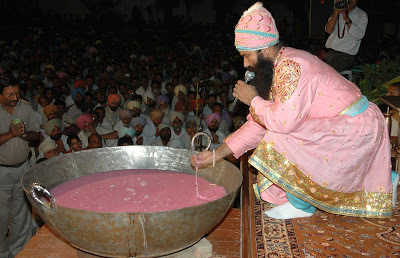 Ram Rahim had been accused of imitating Guru Gobind Singh at a congregation in Salabatpura, Bathinda, in 2007. File Photo

A pink robe worn by Dera Sacha Sauda chief Gurmeet Ram Rahim Singh during a congregation at Salabatpura here on May 13, 2007, when he kicked up a row by allegedly imitating Guru Gobind Singh, has been lying dumped in the “malkhana” of Kotwali police station for the past decade.

The then Bathinda DSP, Surinder Pal Singh (now posted as an SP at Barnala), had recovered the robe from Ram Rahim’s possession at Sirsa after the registration of a case under Section 295-A (deliberate and malicious acts intended to outrage religious feelings) of the IPC. The dera chief never came here to attend court hearings.

“A New Delhi-based tailor had designed the robe as per Ram Rahim’s instructions,” said Surinder Pal Singh. The police investigation belied Ram Rahim’s claim that the robe was given to him by one of his followers.

“The case property is usually disposed of or handed over to the complainant or the accused on the basis of court orders. If there is no order, the issue is settled by the court on the basis of an application filed by either party,” said Patiala-based advocate Barjinder Singh Sodhi.

In this case, neither the complainant (Rajinder Singh Sidhu) nor the respondent (Ram Rahim) moved an application in the court.

When contacted, Sidhu alleged that a fake affidavit was filed on his behalf with the intention of closing the case. “I will seek reopening of the case by filing a petition in the Punjab and Haryana High Court. As far as the robe is concerned, the SGPC should have sought its custody,” said Sidhu, president of the Khalsa Diwan Gurdwara Singh Sabha, Bathinda.

“We will get the issue examined by the district attorney,” said Bathinda Zone IG MS Chhina and SSP Navin Singla.

Violence had erupted in parts of Punjab and Haryana in May 2007 after the dera chief’s alleged act of blasphemy. At least three persons were killed and hundreds injured in clashes between Premis and Sikhs.

Ram Rahim had been absolved of the charges after the police filed a cancellation report in the court of the Additional District and Sessions Judge in 2014.