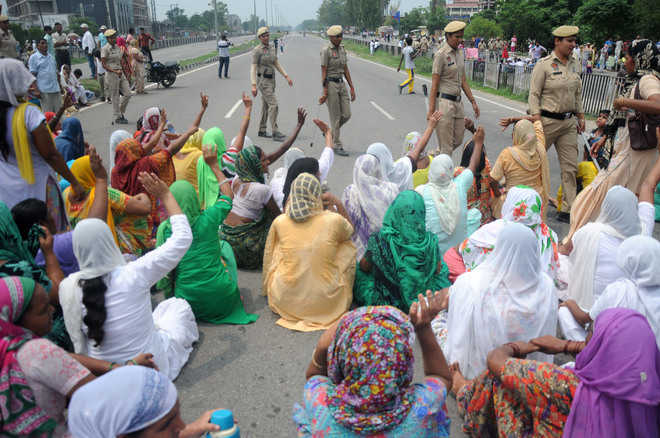 Protesters block the Jalandhar bypass on Sunday, a day after the murder of pastor Sultan Masih in Ludhiana. Tribune photo: Himanshu Mahajan

The blockade lasted for over three hours. It was lifted after the police assured the protesters that the culprits would be nabbed soon.

He said the police had been working on various theories and it would be too early to say anything. “We cannot rule out the terror angle. Further investigations are underway,” Dhoke said.

“We have collected CCTV footage from the area. There are some leads on the bike-borne assailants. We are trying to identify their entry and exit routes,” he said.

Dhoke said the family had agreed to perform the last rites of the pastor on Monday.

Sources said the police had increased the security of churches across the state as a preventive measure. Unconfirmed reports stated that the pastor was under threat, although the police had refuted it.

Abraham Irshad, PPCC general secretary, in a statement, condemned the killing, saying that disturbing peace in the state seemed to be the motive behind the crime. He appealed to the Christian community to maintain peace.

Chandigarh: Chief Minister Capt Amarinder Singh on Sunday announced ex gratia relief of Rs 5 lakh for the widow and a police job for the son of the deceased pastor. The CM called up the family of Sultan Masih to convey his condolences over the tragedy and promised strong action against the culprits. Amarinder assured Masih's widow Sarabjit Kaur of all possible government help. He told Sarabjit that her 18-year-old son Alisha would be provided a job in the police department to sustain the family, said an official spokesperson. TNS

CM for crackdown on communal forces

Chandigarh: Taking a serious note of the killing of a Christian priest in Ludhiana, Capt Amarinder Singh on Sunday directed the DGP to order a crackdown on elements trying to stir communal passions in the state by indulging in such attacks and to remain on high alert against such forces. Attempts to vitiate the state’s environment would not be tolerated at any cost, Amarinder said. TNS