NEW DELHI:The two recent incidents of alleged attacks on Dalits in Punjab today reverberated in Parliament with the Congress and BSP demanding the dismissal of the SAD-BJP government. The heinous incident of chopping off arms and feet of a Dalit worker at a farmhouse of an Akali Dal leader in Abohar and crushing of a young girl under a SAD leader’s bus at Lambi, led to repeated adjournments of the House through the day. 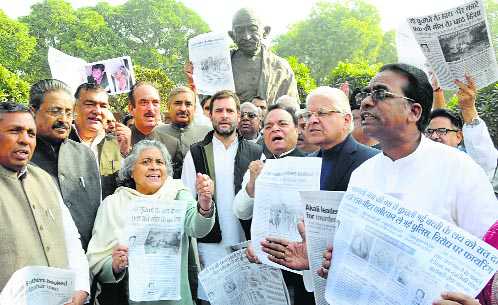 Congress vice-president Rahul Gandhi and party MPs hold placards as they raise slogans during a demonstration over law and order situation in Punjab, in New Delhi. photo: Manas Ranjan Bhui

The two recent incidents of alleged attacks on Dalits in Punjab today reverberated in Parliament with the Congress and BSP demanding the dismissal of the SAD-BJP government.

The heinous incident of chopping off arms and feet of a Dalit worker at a farmhouse of an Akali Dal leader in Abohar and crushing of a young girl under a SAD leader’s bus at Lambi, led to repeated adjournments of the House through the day.

Leader of the Opposition in the Rajya Sabha Ghulam Nabi Azad said these incidents showed the prevalence of “jungle raaj” in Punjab. He said what was happening was worse than terrorism and there was no law and order in the state. "The state government should be dismissed...we are not just demanding action (against the accused), we are talking about dismissal of the government,” he said.

BSP chief Mayawati criticised the SAD-BJP coalition government for its “inability” to prevent atrocities on Dalits. The incidents were both "painful and shameful", she said blaming the liquor mafia for the Abohar incident where the limbs of a Dalit worker were chopped off “as part of a conspiracy”.

“The Union Government should intervene. The state government should be dismissed,” she said. Raising slogans “Dalit virodhi sarkar nahin chalegi”, BSP members continued the protest and amid the din, External Affairs Minister Sushma Swaraj made her statement on her recent visit to Pakistan.

The government attempt to seek cooperation for the passage of the Scheduled Caste and Scheduled Tribes (Prevention of Atrocities) Amendment Bill was not conceded by agitated members with Azad stating that while the party supported the Bill and its passage in this session, it could not be done when the House was not in order.

On his part, Minister of State for Parliamentary Affairs Mukhtar Abbas Naqvi said the government condemned the incident in the strongest possible terms and supported strict action against the accused.

Law and order, he said, was a state subject and could not be discussed in Parliament. The state government was entrusted with the task and it was taking steps.

Denying SAD role in the incident, party MP Balwinder Singh Bhunder alleged politics was being done on the issue. He said anti-poor and anti-Dalit incidents were taking place in many states, including those ruled by the Congress.

"The state government is taking strict action. Punjab is a state where there is no caste bias and issues. Yeh Guru Nanak ka suba hai,” Bhunder said. Outside Parliament, Congress vice president Rahul Gandhi said in Punjab, innocent people were being butchered. "This is out of order, out of line."

Anand Sharma, Congress Deputy Leader in the Rajya Sabha, alleged a Valmiki was brutally killed in Ferozepur at the behest of an Akali leader who ran a liquor mafia in which several top Akali leaders had stakes. His limbs were dismembered. He was killed and then a false charge of rape was pressed in the matter.

"The Centre should dismiss the Akali-BJP government given the complete breakdown of law and order and direct the involvement of the ruling class in a range of businesses including liquor, transport and sand. Another girl was crushed under a Deep Roadways bus owned by an Akali leader in Bathinda. No arrests have been made. Instead, the police lathi-charged protesters in the area,” he said.

Speaking to the media, Azad alleged: "There is a parallel economy and mafia running in Punjab. Liquor barons and drug mafia are running government and unfortunately ministers are hand in glove with this mafia.”

“Even the IS does not cut off limbs of people,” he added.