CHANDIGARH: Three persons, including two children, were drowned on Monday as heavy rain continued for the third day across Punjab, leaving cities and towns waterlogged and paddy fields flattened in many areas. 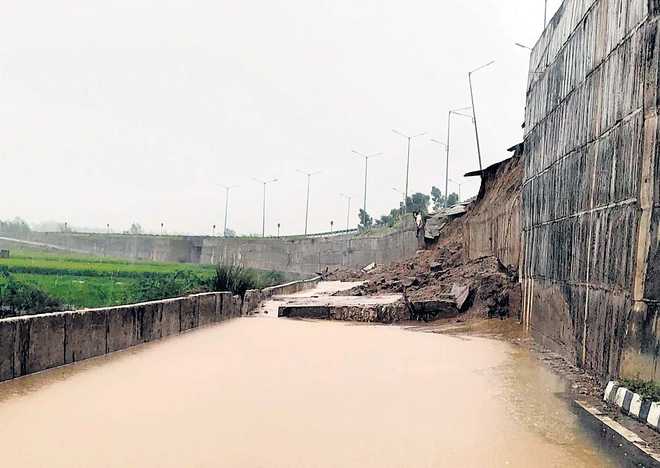 A portion of the Chandigarh-Bathinda bypass road that collapsed near Dakala village in Patiala on Monday. Tribune photo: Rajesh Sachar

Three persons, including two children, were drowned on Monday as heavy rain continued for the third day across Punjab, leaving cities and towns waterlogged and paddy fields flattened in many areas. The state government announced a ‘red alert’ and ordered that all educational institutes will remain closed on Tuesday.

The Army has also been asked to remain on alert.

Even as people living close to the Sutlej and Ghaggar rivers were put on alert, there were no reports of serious flooding.

At the ‘Sodal Mela’ in Jalandhar, an eight-month-old daughter of a Rajasthani stall owner drowned after she fell off a bench on which she was asleep in the night as the area was inundated. In Amritsar, a man and his 12-year-old son drowned after their car fell off a bridge into an overflowing drain near Khiyala village during heavy rain.

Villagers in the Bet area of the Sutlej in Ludhiana were tense as the level in the river was rising continuously. The Ghaggar was also rising rapidly in Patiala and Sangrur areas, though the level was well below the danger mark.

While the state on an average received 60.8 mm of rain between Sunday and Monday morning, 243 mm of rain was recorded at Pathankot IAF base, followed by Gurdaspur at 225 mm and Amritsar 203.1 mm.

The Meteorological Centre said the worst may be over, though the sky would remain “generally cloudy”. Meanwhile, the Punjab Government has ordered a special girdawari to assess crop damage.

Decks cleared for acquisition of land for Chd-Baddi rail line