CHANDIGARH: Punjab has broken all records in wheat production and wheat procurement this year. 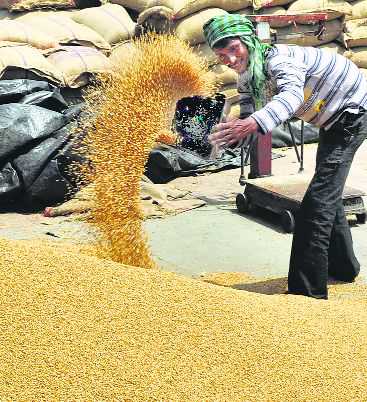 Anandita Mitra, Director, Food and Supply, Punjab, told The Tribune that while 96.50 LMT of wheat was procured from the Malwa region, 19.10 LMT was procured from Majha and 13.90 LMT from Doaba. “More than 95 per cent of the wheat stocks procured have already been lifted, with over Rs 20,000 crore worth of payment to farmers having been released,” she said.

Officials in the state Agriculture Department said the total wheat production has been 181 lakh metric tonnes. “The yield of wheat has increased substantially — from 50.64 quintals per hectare to 51.71 quintals per hectare. This is mainly because we managed to curb the use of poor quality seed. Farmers got subsidy on seed only if they bought it from the state-owned seed corporations or Punjab Agricultural University. As a result, wheat production in Punjab has also increased,” says Sutantar Kumar Airi, Director, Agriculture, Punjab.

Though late rains, just before the harvesting, in large parts of the state were expected to play a spoiler and bring down the wheat yield, the farmers in most parts acted swiftly and drained standing water from the fields. It is only in Hoshiarpur and Gurdaspur districts that the waterlogging problem in fields persisted, especially in areas near the Beas and Sutlej that did lead to a lesser yield, says Airi.