CHANDIGARH: Terming the move to scrap Article 370 as “totally unconstitutional”, Punjab Chief Minister Captain Amarinder Singh on Monday flayed the manner in which the Centre had imposed its decision on Kashmir. 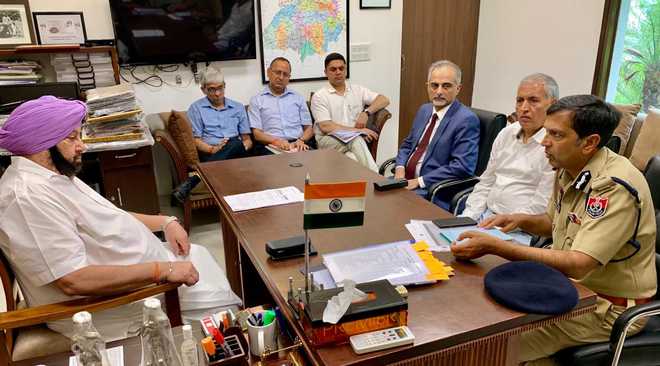 Chief Minister Capt Amarinder Singh at a meeting to review the security situation in the wake of abrogation or Article 370 in J&K.

Terming the move to scrap Article 370 as “totally unconstitutional”, Punjab Chief Minister Captain Amarinder Singh on Monday flayed the manner in which the Centre had imposed its decision on Kashmir.

Singh said the democratic fabric of the nation had been “ripped apart with” this “unprecedented violation” of Constitutional norms.

“It is a dark day for the Indian democracy,” said Singh, adding that the Constitution of India had been “rewritten” without following any legal provisions.

Such a “historic” decision should not have been taken and pushed through in this “arbitrary manner”, he said.

According to Singh, this would set a “bad precedent” as it would mean that the Centre could reorganise any state in the country by simply imposing President’s rule. The chief minister added that the Constitutional provisions had been “abused as never before”.

None of the stakeholders were taken into confidence, and there was no discussion with other political parties preceding the unilateral decision of the central government, the chief minister pointed out. The BJP is using its “brute majority to bulldoze democratic and constitutional norms”, the chief minister said.

“No effort was made to evolve a consensus on this vital matter of national security and concern,” said Singh, asserting that given the sensitivity of the Kashmir issue, any decision should have been taken after following due process of democratic and legal norms. Even the Presidential order reorganising Jammu and Kashmir and scrapping Article 370 had effectively bypassed the parliamentary requirement for a two-thirds majority required for a constitutional amendment, he pointed out.

The government had made a “total mockery” of the constitutional and democratic foundations of the nation, Singh said. Dubbing the Centre’s act of putting political leaders in Kashmir under house arrest ahead of the announcement as “despotic”, he said the voice of the people had been completely suppressed, which could have serious negative repercussions for India.

Amendment to clause 3 of Article 370 as per the Presidential Order, called the Constitution (Application to Jammu & Kashmir) Order 2019, had been effectively engineered without following the due process laid down in the Constitution itself, he said.

Clause 3 of Article 370 said the President could declare the provision inoperative only on the
recommendation of the Constituent Assembly of the State. A presidential notification changed the “Constituent Assembly” to mean “Legislative Assembly”. In a related amendment the notification said that the term “Legislative Assembly” could imply governor of the state—especially significant given that the state currently functions under President’s Rule.

Nanda also said given that the central government should have introduced a constitutional amendment to Article 370 (3) of the Indian Constitution instead of resorting to a presidential order.